There were positive lessons to be learned from the recent UK-Africa Legal Trade Mission. Ben Rigby attended the virtual event. 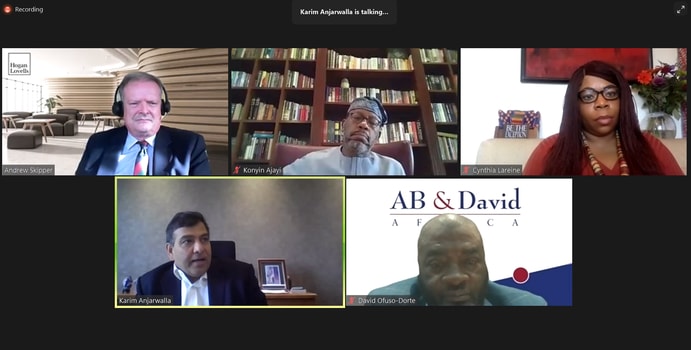 “The law is a constant thing. It keeps us grounded, ensuring that our societies remain free, fair and able to flourish, in good times and bad.”

Those were the opening remarks of UK’s Justice Secretary, Robert Buckland QC, who welcomed delegates to the event, dedicated to encouraging trade links in legal services between the UK and those from Ghana, Kenya, Nigeria and South Africa.

The event, said Buckland, would “bring together the very best legal minds in our respective nations to discuss the huge potential for collaboration between our countries, expand international business networks, and to share the depth of our legal expertise for the benefits of everyone.”

He, with Emily Tofield, creator and director of the UK’s ‘Legal Services are GREAT’ campaign, which brings together the Ministry of Justice and the Department of Trade, spoke at the launch of the event in December 2020.

They and the delegates listened to a keynote address delivered by Emma Wade-Smith, the UK’s Trade Ambassador, who noted the breadth of African countries that use the UK’s courts, including in London, very much a centre for international disputes, with 80% of cases at the ICC’s London Court of International Arbitration involving international clients.

With £66 million being spent on legal services in Africa in 2018, Wade-Smith was right to point out that the UK’s experience and expertise in legal services could play an essential role in Africa’s economic diversification and response to the global pandemic.

The choice of countries taking part was carefully calibrated; UK exports of legal services ranged from £36.5 million to South Africa, £17 million to Nigeria, £8 million to Ghana, and £5.4 million to Kenya; but it would be wrong to think the event was unilaterally focused on what the UK had to gain from Africa. Quite the reverse.

At the heart of the event was the chance to hold a conversation; an opportunity for lawyers, and their clients, to expand their business activity in and with Africa, one actively supported by Africa Legal.

With an agenda spanning three days, both dispute resolution and deal-making, the industry event, which focused on relationships spanning east, west, and South Africa, discussed how collaboration could take place in the legal sector post-Covid-19.

In an agenda which ranged, in the first day, from legal technology to collaboration, and on its second day, on dispute resolution during the pandemic era and on the role of the Bar of England & Wales and its expertise in associated advocacy, the topics discussed were comprehensive; but the calibre of African law firms involved was compelling. So, too the depth of London law firm talent with African heritage taking part.

Two sessions, however, illustrated the higher ground, away from an innovative 1-2-1 networking function and the practice area –led discussions, not least for the quality of the speakers, and the nuance of their thought.

The first was a session led by Andrew Skipper, chair of the Africa practice at Hogan Lovells. Skipper’s contribution to developing African business spans both the practical – as seen by Hogan Lovells’ work in the mining industry, as featured on this site – and the polemical, thanks to the firm’s popular podcast on African legal affairs.

As co-chair of the UK government’s Africa Investors Group, his interest in collaboration and partnership in legal services was as strategic as it was pragmatic, but no less than that of consultant, Cynthia Lareine, of Lareine Gold Consulting.

The audience stressed the importance of common law, which provided “stability and certainty”, one speaker said, but stressed there was no reliance on colonial ties for its own sake; just as francophone countries did not necessarily rely on civil law as an alternative.

That stability and certainty has been hard won - each of the countries had wrestled with rule of law issues, with lawyers, the courts and the press all contributing to preserving it, but the common law was seen as predominant, albeit there were a variety of “strong countervailing factors” to London’s prominence, not least alternative jurisdictions such as Singapore and Mauritius.

Brexit, too, was mentioned, given EU jurisdictions might seek to encourage the use of laws other than English law, having also developed their own facilities to hear common law disputes.

The panel acknowledged the importance of investor sentiment, with many investors insisting on recourse to UK law for historical reasons; but with increased Chinese involvement, the use of other forms of common law, such as Hong Kong or Singapore, which was not solely reliant on UK precedents, must also play their part.

ALL LAW IS LOCAL

Equally, the panel stressed an African narrative to the growing confidence in, and development of, local laws, not least local dispute resolution, especially with national, and regional, arbitration centres.

“At the end,” noted one speaker, “all law is local”, and with the skill of local judges increasing, and the growth of regional and pan-African initiatives, the prospect of an OHADA for English law jurisdictions, the panel was told, was a tantalising one. That increased localisation of laws, and the way in which local lawyers told their stories working with them, would help African lawyers stay creative and resilient, helping to get deals done.

As impacts of free trade, changes in supply chains, and the impacts of the pandemic play out, significant changes would take place, thanks to the Africa Comprehensive Free Trade Agreement, with contracts spanning Cairo to Cape Town.

There, noted the panel, the English experience in how to integrate infrastructure projects, say, that spanned regions, or contractual collaborations that span nations, would be useful, in passing on lessons learnt, especially in a continent whose realities varied widely.

So, too, would the way in which the financial consequences of the pandemic would be managed, with debt relief back on the agenda, there would, one speaker said, need to be a balance struck between managing the cost of debt, and the rule of law issues that enforcing it might mean for nations.

Similar themes emerged from a panel debate led by David Greene, president of The Law Society of England and Wales, and lawyers from a variety of London firms, including Joshua Siaw MBE,  head of the Africa practice, at White & Case,  Jonathan Tickner, of Peters and Peters; and Peter Kasanda of Clyde and Co.

This was, as Greene said on LinkedIn, a session which showed that Africa offered huge opportunities for all. Two global law firms, one US-headquartered, the other UK-centric, were on the panel, but Greene’s presence and that of Tickner showed that medium-sized, sole-office firms had their place too.

There was equal enthusiasm for the opportunities free trade offered Africa, from deals to due diligence, while dispute resolution was equally important, not least because risk management is  important in the post-pandemic period. Yet, as risk becomes more stable, so too would finance, while the infrastructure and capacity-building needs in key industries were also acknowledged.

That is not to say the UK-led panel were not aware of problems ahead, any more than the Africa-led panel before it had been; debt, insolvencies and restructuring were all mentioned. Overall, however, the story was one of positivity. For as Greene said: “The Africa story is a good story.  The Africa story is a GREAT story.”