In an exclusive interview, East African law firm ALN//Anjarwalla & Khanna’s Forensics, Risk & Compliance Director, Willie Oelofse, and Roddy McKean, director of the Corporate Department, spoke to Africa Legal’s Tom Pearson about why a forensic lawyer should be on every due diligence team. 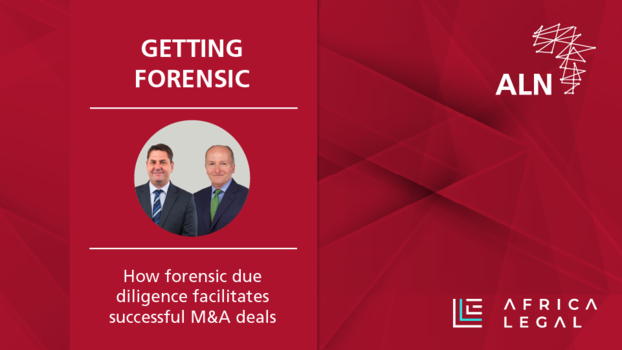 Oelofse has dealt with forensic assignments covering various jurisdictions and industries for more than 25 years and said that investors were increasingly concerned about fraud and money laundering and wanted these addressed before considering a purchase.

“A legal forensic audit that interrogates every aspect of an M&A deal, and which then looks at how the different parts fit together and impact each other, should be part of every due diligence process,” he told Pearson in an interview for the Africa Legal Podcast Series.

He was interviewed alongside his colleague, McKean, who has worked in mergers and acquisitions, private equity, restructurings, joint ventures and other corporate transactional work across the globe for more than three decades.

“Traditionally, we have done most of our work in the reactive space – investigations – which inevitably have negative connotations. However, now we are doing a lot of proactive work related to fraud risk, regulatory risk and compliance programmes (for instance) putting in mechanisms that are anti-bribery and anti-money laundering. We have also been doing work related to cyber and data security.”

This added strength to what Anjarwalla & Khanna offered clients especially since the M&A area was where many of these issues emerged.

McKean said investors were concerned about issues related to fraud cyber security (and more) and had recognised, by their own experience, that these needed to be addressed before an acquisition rather than after.

Due diligence used to be a tick-box exercise but the consequences for an investor when it was not done properly were devastating, McKean said.

Oelofse told how he had first become involved in due diligence, and the way it was done, while working on a transaction that “went bad” when none of the issues that should have raised concerns had been red-flagged.

“It was a case where the revenue of a business had been inflated by 600% yet, despite this, the legal due diligence had been done well,” he said.

The other arms of the due diligence process – tax, financial and environment – had all been completed without issue. It was only when Oelofse, as a forensic lawyer, examined, what was already a closed transaction, holistically, that he picked up inconsistencies and realised that the forecast for revenue was “way off”.

“In the end the buyer was able to successfully take action against the seller but only because the legal due diligence aspect of the transaction held up.”

Nevertheless, it was an experience that gave him insight into the value of stepping back and looking at the whole transaction with a sceptical eye. It has continued to influence the way he maps risk, he said.

“The tax, financial and environmental due diligence reports all provided significant detail, but no-one had an holistic view of the four reports. No-one stitched it together.”

The different teams at ALN Kenya work together on this premise – mapping risk in each area and then working together to assess and deal with what they find.

“When a deal is struck at the outset it is based on information provided by the seller. There is always an aspect of due diligence that might lead to price reduction, indemnity or maybe the deal won’t be done at all but, when you are dealing with fraud then the issues become much more fundamental.”

It was at this point that having a “professionally sceptical” forensic lawyer played a crucial role.

Oelofse said it was accepted that the business environment in Africa carried a higher level of risk and challenge than other parts of the world.

Having a forensic lawyer comb over a transaction as part of the due diligence process meant that not only were checks and balances in place but that, like a complicated jigsaw, it ensured that all the pieces were there and properly fitted together.

The forensics and law expert team from ALN Kenya recently led a conversation on conducting effective due diligence and managing risk in M&A transactions during a special webinar focused on M&A trends and opportunities in East Africa. To view this discussion, click here

To listen to this highly informative conversation tune in to the Africa Legal Podcast Series on SoundCloud, Spotify or Apple