Africa Legal was a proud sponsor of the competition, Tania Broughton reports 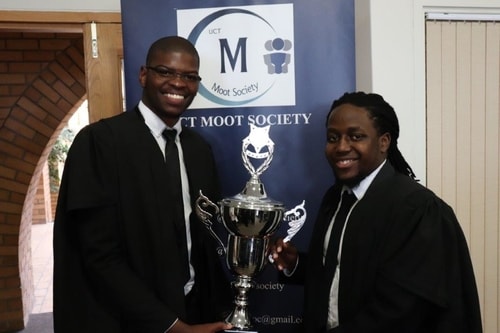 Was South Africa’s Competition Tribunal right in giving “immunity” to a self confessed  member of a bread price fixing cartel in the Western Cape - thus blocking any attempts by civil society organisations to take civil action against it for damages?

In summary, this was the weighty question argued by “mooters” at this year’s Justice Kate O’Regan Intervarsity Moot Court Competition, hosted by the University of Cape Town.

While the competition has been limited largely to entrants from the Western Cape in South Africa, it is hoped that the it will become more “African” in future years with the use of technology.

The A team of the day was “team nine” compromising final year LLB students Hanani Hlomani and Sibusiso Genukile from the University of Fort Hare (UFH) in the Eastern Cape province of South Africa.

UFH was once THE  place for black South Africans to study and boasts alumni including Nelson Mandela - who once wrote “for young black South Africans like myself, it was Oxford and Cambridge, Harvard and Yale, all rolled into one” - Oliver Tambo, Desmond Tutu, Kenneth Kaunda, Seretse Khama and Julius Nyerere.

While the  university fell into a financial slump after apartheid, the win is a big boost for its law faculty.

Senior law lecturer Bronwyn Batchelor said the team had begun preparing for the competition in May this year when they were selected to participate.

But the competition was tough. And the team only won by one point, organiser Lauren Loxton said.

Hlomani, speaking on behalf the team, said: “The other students we went up against were equally prepared and had some very compelling arguments. The levels of confidence shown by the participants were huge and it was very difficult to discern who had the better presentation - we are sure the judges will agree on that one.

“The preliminary rounds allowed for more freedom to follow one’s structure of argument and the questions from the presiding officers weren't as difficult. However, in the semi final and final, the questions got harder and harder and it became more and more difficult to stick to structure.

“The judges were very specific. You can imagine being questioned by two Justices of the Constitutional Court and two high court judges?  It was nerve wracking but, in the end, the test pushed us to the limit and we are glad we had the opportunity to test our advocacy skills before real judges.  We wouldn't trade it for the world.”

Hlomani, who wants to study an LLM in intellectual property, said winning meant everything to the team.

“I have been mooting for 3 years now in different competitions and coming agonisingly close to winning in a few of them, so to finally win something means the world to me.

“Given that we were the only team from outside the Western Cape makes it all the more sweeter. Also it puts the university on the map as a force to reckon with. We have very capable students and lecturers alike. It’s great to prove that the faculty of law at UFH is alive and kicking.”

Bernard said: “The case presented complex legal issues but we had sufficient time to grapple with the issues and prepare our arguments, especially since it was our first time dealing with competition law.”

She said she was looking to serve articles at a corporate and commercial law firm in the interest of becoming a successful attorney in the this sector.

Dewey was also awarded a special prize of best speaker because, the judges said, “she really did just shine in the final”.

Ahead of the competition, all the two-people teams had to submit written heads of argument, with one arguing for and the other against.

Ferdinand Botha and Kara Meiring of the University of Stellenbosch scooped this prize.

Finally, the best speaker in the preliminary rounds was awarded to John Spengler of Varsity College.

The Judges would not have been easy to please.  They included retired Constitutional court judges Kate O’Regan (after whom the competition was named this year) and Albie Sachs and Judges Dennis Davis and David Unterhalter.

“They were very impressed with the teams, especially in the final where they said the teams handled questions very well and put forward creative arguments.

“The competition was truly an incredible event. There was a wonderful spirit of camaraderie between the teams and the standard of mooting was inspirational.  It was also great to see so many teams from so many different institutions compete against one another.

“We are grateful to Africa Legal (a sponsor of the event) for helping us make this event a success.”

The competition encourages students to tackle a legal topic outside of the core syllabus and for this year the topic was based on  Competition Law and focussed specifically on the bread cartel case.

“This competition is unique because there is an additional element whereby students are required to attend skills training seminars hosted by the Cape Bar Society and organised by the UCT Moot Society.

“It is line with the overarching purpose of the UCT Moot Society, which is to foster a culture of mooting and encourage students to develop and perfect their skills within an inclusive and fun atmosphere,” Loxton said.

Regarding the future of the competition, Moot society chairperson for the coming year Alex Gloor said the intention was to continue to grow the competition but this was still to be discussed by the committee.

“It is a very important part of our calendar, possibly the highlight of the year. We will certainly be inviting back all the participants of this year’s competition as well as inviting other participants,” he said.