The top ten articles on the Africa Legal platform in 2020 reflect the extremes of practising law on a continent where, in some places, lawyers are setting the global standard in their discipline while in others they continue to grapple with justice and human rights. 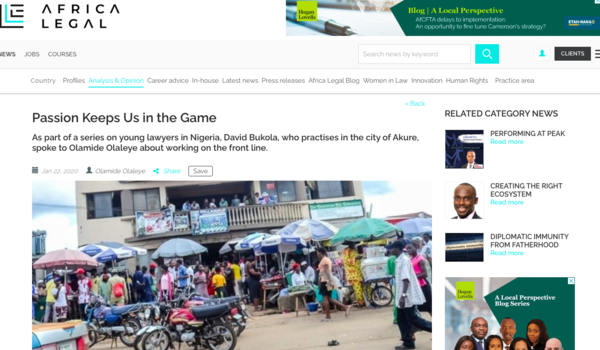 The top story was written by a new writer, Olamide Adeniyi, who went into the hidden corners of Lagos to speak to the “little lawyers” practising in backstreet rooms. These are the lawyers fighting battles for people who, possibly because of a lack of resources or not realising how a lawyer could help them, are beginning to access legal support. The Lawyers of Lagos series was also a reflection on Nigeria’s legal education which is producing hundreds of graduates every year, many of them frustrated that they cannot find work.

To read Olamide’s articles, which came in at number one and seven, click here and here

Second on our list of most read articles was an interview with leading African law firm, Bowmans’ chairman and senior partner Robert Legh. In the article Legh gives insight into the firm’s “Africa Project” and the decision to open offices in Malawi and Zambia - despite the pandemic. Take a look here

Global law firm Hogan Lovells has had a presence in Africa for many years and the insights of its local team were what readers were after when they read the “A Local Perspective Blog Series”. This article, at number three, introduced readers to the series by linking with a podcast interview with lawyer Alison Diarra who oversees the firm’s relationships across the continent.

Number four was an interesting reflection on how lawyers in African are thinking about their own development. This was an insight piece written by Victoria Cromwell, director of Programmes for the BARBRI Group. Victoria explained how African lawyers wanting to expand their practice to include England and Wales needed to be aware the qualification process was changing.

Interviews with strong professional women never fail to attract readership and, our article at number five, is a perfect example. This interview with leading Kenyan lawyer Esther Omulele focused on her appointment as managing partner at MMC Asafo. What drew the readers was Esther’s reflections on her journey into law and how her father, a court clerk, influenced her decision to enter the profession.

Number six was almost inevitable - and that was a reflection on how South Africa law firms reacted to the pandemic. Multiple-award winning journalist and Africa Legal writer Tania Broughton looked at how law firms were quick off the mark to establish internal Covid-19 protocols and in ensuring clients had speedy access to legal advice on how to deal with the fallout of the virus.

Number seven, mentioned earlier, was another from our Lawyers of Lagos series. This was followed, at number eight, by a ranking of Africa’s 50 largest commercial law firms with ENSAfrica topping the table.

Number nine was an exclusive interview with  Johannesburg-based lawyer Warren Beech who confirmed that, with long-time partners, Nicholas Veltman, Eben van Zyl and Refiloe Vengeni, he had left Eversheds Sutherland to go it alone. The article announced the formation of Beech Veltman Incorporated, a law firm serving clients in the global mining, renewables and infrastructure sector.

And finally, making the top ten of Africa Legal’s most read articles of 2020, was an interview with Lagos lawyer Adeleke Alex-Adedipe on his appointment as Managing Partner of the tech-driven commercial law firm Duale, Ovia & Alex-Adedipe (DOA) in Lagos. Again, readers loved the personal detail in this article where this high-flying professional reflected on how  he used to watch his father, a lawyer, dress for work and he knew he too wanted to be part of the same world.

Africa Legal endeavours to bring the real stories of African law to our readers - be this about new deals and appointments to ground breaking judgments and other news affecting lawyers. Read more of our features and analysis as www.africa-legal.com