The African Legal Awards, in partnership with Africa Legal, celebrates excellence from across the continent this week. Save the Children is the awards chosen charity partner. Tony Carnie reflects on the impact of one project supported by this global charity. 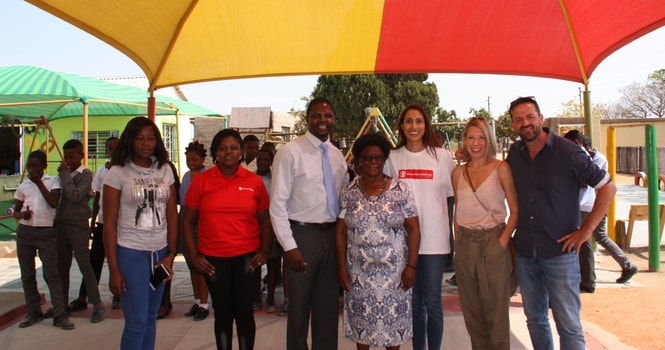 Save the Children and Africa Legal visit to Nosa Early Learning Centre in Winterveld. Granny Mapula Joyce Morudi pictured in the centre.

A giant meteorite slammed into the ground near the city of Pretoria many thousands of years ago. Travelling at nearly 60 000 kilometres per hour, the impact from this rock punched a massive dent into the Earth and pushed up a mountain ring known as the Tswaing meteorite crater.

Just a few kilometres south of this crater in the dusty streets of the Winterveld community, Granny Mapula Joyce Morudi is also trying to make an impact – albeit on a smaller scale – by helping to uplift the lives of hundreds of youngsters at the Nosa Early Learning Centre.

Some are orphans or from single-parent homes. Others don’t exist on official paper because their parents are refugees, migrants or unemployed. And because they lack birth certificates or identity documents several have been denied admission to local government schools.

Granny Morudi moved to Winterveld nearly 30 years ago and soon noticed many children “just roaming around” because there were no creches in the area.

She knows what it’s like to grow up in a single-parent home: her dad died when she was eleven, leaving her mum to raise six children with the meagre salary she earned as a domestic worker.

So she called a community meeting and set up a small play group which later expanded into a more formal early childhood development centre (creche), known today as the Nosa Early Learning Centre.

The centre now has three elements: a “bridging school” for 231 learners aged between seven and 20 years old; an early childhood development centre for 92 children for those between three months and seven years, and an aftercare/homework/feeding programme.

Morudi says the classrooms are mostly converted vehicle garages, with a small playground, sports yard and a patch to grow vegetables.

She would like to build a dormitory/safe house for vulnerable children like the orphan teenage girl who ran away recently because of trouble at home.

“She was living with a granny who sells liquor from her home – that’s not really a conducive environment for a young girl.”

She also recalls enrolling a 14-year-old girl from Mozambique who had never set foot in a school, but was desperate to learn how to write her name. There are similar stories from other youngsters who now come to Granny Morudi’s bridging school because they remain ‘undocumented’ and have not been able to get into local state schools.

“We teach them English and the local seTwsana language, as well as mathematics and life-skills, some drama, sport and gardening,” says Morudi. “For those without documents, we also try to provide a useful skills development programme.”

Nyika Machenjedze, who heads Save the Children SA’s “Children on the Move” programme, says while the constitution and other legal instruments support the right of all children living in South Africa to basic rights such as education, healthcare and documentation there was still a gap between the legal framework and what actually happens in practise to migrant children.

“All children who are born here should be documented. That does not necessarily mean giving them citizenship – yet many such children remain undocumented and we still see them being expelled or denied access to school because they have no documents.”

While Save the Children and other groups fight to change this situation, Machenjedze says it remains essential to provide support and life skills to them in the absence of formal education.