A Lesotho High Court judge has laid down the law, telling rogue policeman who torture citizens that “they should crawl on their bellies in shame”. Tania Broughton reports. 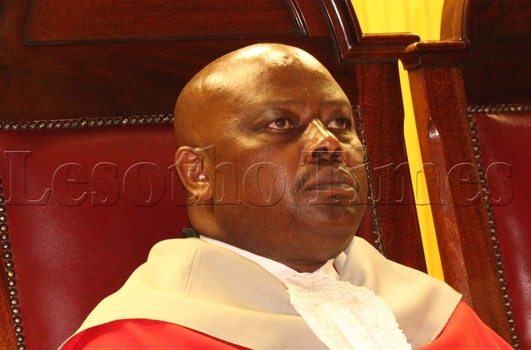 Judge Sakoane Sakoane, sitting in the Maseru high court, did not mince his words.

“The police are warned: Forever wear the values of the Constitution on the epaulettes of your uniforms. The constitution protects the rights of all criminal suspects and you violate them in your own bad names and not the good name of the Nation.

“There shall be no further warnings hereafter, except uncompromising judicial eradication of the pernicious culture of police brutality,” he said.

“The Constitution is boss.”

The matter before him was a damages claim by Tslolo Tjela, the 51-year-old chairperson of the village crime prevention committee in Ha Likhotolo.

In August 2015, he and other members of the committee were rounded up by a “special task force”, taken to the middle of the village and were forced to squat and jump while being beaten with sticks and guns.

Tjela testified that they were then told to lie down. The beatings continued and stones were put on their chests.

He was injured all over his body and his nose was bleeding. He was in excruciating pain and had to walk with a stick for three weeks.

He immediately reported the assault at the local police station and was referred to a doctor who completed the required medical form.

The police did not proffer any evidence. But in written pleadings, they denied the assault and said they had been looking for guns and had forced Tjela to lie down because he was being unco-operative.

But Judge Sakoane rejected this version.

“If they went to search for guns on that day, they did not find any, and the only purpose was to torture him in an excercise in sadistic behaviour,” he said.

“They inflicted pain because of their anger and frustration in failing to find what they were looking for. The plea does not even pretend that they had any search or arrest warrant. Such conduct is an anathema to every value of the constitution.”

The Constitution was not a “legal nuisance that police officers can kick away with their boots”.

Referring to utterances of Past President Thomas Thabane who said “beat them hard, but not in public view”, the judge said the police had been cursed by these words.

“It is utterances like these by the head of the executive which help let loose police officers. This case is a living example of the bitter results of a lethal cocktail of unprincipled populistic, demagogic and whistle-dog politics of crime control through state-sponsored violence.

“Those who issue such orders and those who obey are parents in crime.”

He  ordered that the judgment be brought to the attention of the relevant authorities to follow up in a criminal case and the possible removal of these “terrorists in uniform”  from the police service.