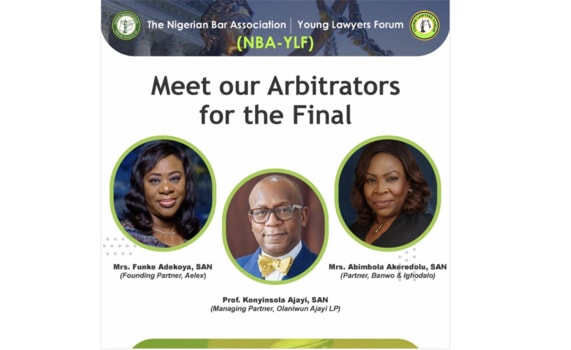 Each team had two “oralists” - Team Lagos as the Claimant and Team Onitsha as the Respondent, and made presentations on four issues – two preliminary issues and two substantive issues. Each presentation was scored on the basis of – organisation, clarity of thought, presentation skills and responses to questions from the Arbitral Panel.

The finals of the NBA-YLF Arbitration Challenge 2021 had three categories of winners – the winner; the first runner-up; and the best oralist. The “Best Written Submission” was also announced at the finals. Following thorough and well-articulated presentations by both parties, and deliberations by the Chair and co-arbitrators of the Arbitral Panel, the winners of all categories emerged.

Team Onitsha was announced as the winning team, bagging the grand prize, with Team Lagos announced as the runner up. The prize for “Best Oralist” was awarded to Chinedu Okoro and the “Best Written Submission” award went to Team Ibadan.

In providing feedback, the Arbitral Panel emphasised the need for mastery of the facts of each case for presentation at court and arbitral proceedings.

The Chairman of the NBA-YLF, Tobi Adebowale, commended all participating teams in the Arbitration Challenge 2021, noting that the efforts, diligence and industry displayed throughout the competition did not go unnoticed. He also expressed sincere gratitude to the Arbitral Panel for their unwavering support and also appreciated the commitment of the reliable planning committee of the NBA-YLF Arbitration Challenge 2021.

Africa Legal was a proud sponsor of the NBA-YLF Arbitration Challenge 2021 and looks forward to more exciting collaborations with the NBA-YLF.