Strive for Excellence, not Perfection

Adejoke Babington-Ashaye is a Senior Counsel at the World Bank Group in Washington DC. Ifeoluwa Ogunbufunmi spoke to her about her drive to prioritise human rights and promote diversity. 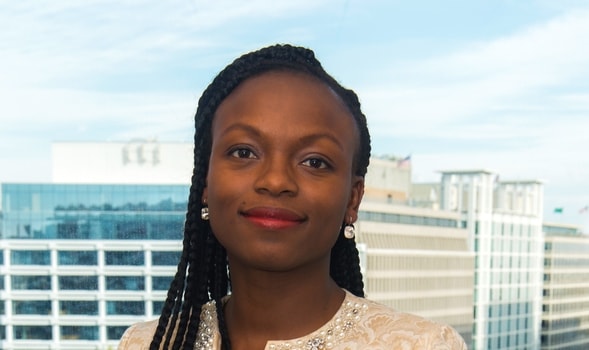 “I grew up under military rule in Nigeria and witnessed suppression and abuse of power. When I was around eight years old, I witnessed two soldiers dragging and beating a crying woman. She had allegedly responded to them in a manner they deemed rude. I stood there with other residents in the neighborhood, paralysed by fear of the soldiers and their guns. We did not help the woman. As a child I wished I could have done something. I was disturbed that the adults – who outnumbered the soldiers – were disempowered and could not act. I knew then that I wanted to fight for social justice, but I did not know how.”

Babington-Ashaye later moved from Lagos to Dar es Salaam in Tanzania at the age of 10 where she learned about the genocide that affected families in neighbouring Rwanda.

These were some of the experiences that propelled her to a career in law, specifically international law which she recognised was a vehicle to protect the rights of others. She studied law at the University of Buckingham, UK and obtained her LL.M in Public International Law from the London School of Economics. She is also called to the New York Bar and holds a postgraduate diploma in International Mediation from Queen Mary, University of London.

“The range of cases I deal with are quite wide – for example matters of discrimination, sexual harassment and other forms of misconduct. I work directly as legal counsel to the judges of the Tribunal. I do not represent the organisation nor do I represent the staff.”

Babington-Ashaye worked at the International Criminal Court in The Hague for more than five years where she was involved in investigating crimes against humanity, war crimes and genocide. Her experiences as an investigator led her to co-author and co-edit the first comprehensive book on the law and practice of international criminal investigations which was published in 2018. Prior to her role at the World Bank, she also worked at the International Court of Justice, also in The Hague, where she worked on diverse issues of state disputes such as territorial disputes, diplomatic immunity and state responsibility for violations of human rights.

One of the highlights of her career, she says, was when a newspaper article she wrote in 2004 inspired a campaign against gender inequality and stereotypes in advertising in Nigeria.

“The campaign forced a major telecommunications company to pull one of its adverts which, in my view, perpetuated preferences for the male child and harmful gender stereotypes. This started a critically important conversation about the role of media and influential organizations in propagating stereotypes.”

Babington-Ashaye loves music and is also a solo artist and a songwriter, using her music to further activism in social justice. Her debut album was released in 2016. She also performs with a women’s social justice a cappella group, SongRise, which uses its voice to inspire social change.

“Strive for excellence, not perfection – excellence follows you and becomes ‘reputational gold.’ Remember that you’re more than a lawyer. Try to live the length and breadth of your life,” are some of her words of advice to young African lawyers looking to work in international organisations.