When Ashitiva Advocates LLP was named Kenya’s top law firm at an awards ceremony in Nairobi on April 26, 2018 Nelson Ashitiva knew years of hard work and struggle had paid off. 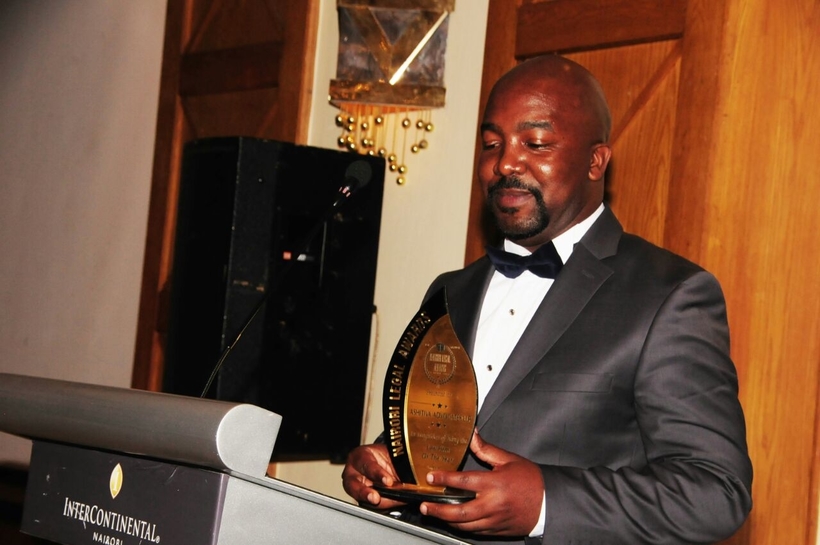 The firm had been recognised in the presence of Kenya’s chief justice, David Maraga, and the new president of the Law Society, Allen Gichuhi, and, when Ashitiva accepted the award, it was to them he turned, saying: “We are the children of the rural areas and this award is for our mothers.”

Indeed Ashitiva Advocates LLP was a law firm that epitomised the African dream.

Ashitiva had come to Nairobi from the Ikolomani constituency in Kakamega in western Kenya eight years earlier. He was a newly married and ambitious young lawyer who was determined to start a firm that could be part of shaping a new Kenya. His vision was to grow a firm that had Kenya’s best interests at its core and which understood its expanding influence in Africa. Keeping his eyes on the future and not allowing day-to-day challenges to destroy this vision would be his biggest challenge.

With a US$150 loan from his mother he set up office at a table in a restaurant called Bugger Dom in the city’s central business district, meeting clients over tea.

After two months in Bugger Dom he was able to rent space in an accounting office and, eventually, his own small office.

“My partners then joined me, initially as associates and interns, growing in the firm to earn their place as partners.”

While this was happening, Kenya was changing too. The 2010 Constitution had “leaped frogged” the country into the future by elevating the protection of civil, political, social and economic rights. This was on the back of the “Kenya 2030” vision which had brought together three key pillars: economic, social and political. The plan encouraged a fresh approach to industries linked to extractives, real estate, agribusiness, renewable energy and the financial services. This all gave an instinctively strategic thinker like Ashitiva a blueprint to align the fledgling firm with what was happening.

But it was not plain sailing.

As recently as last year conflict around the presidential elections meant the country shuddered to a stop as the opposition refused to accept that President Uhuru Kenyatta had won. For Ashitiva it was a frustrating and stressful time. Civil society had tasted what Kenya could become and, now it was the people who pushed for a resolution.

“The politicians shook hands and that, for me, changed the investment atmosphere. Suddenly there was confidence in the country again and an appetite for business.”

Ashitiva believes it has been the industrious and educated expanding middle class who has enabled the legal framework in Kenya – and, with it, politics – to stabilise.

“Yes, we still have moments of indiscipline but the general infrastructure and momentum of the country supports adherence to the rule of law,” he says.

Key to growing the middle class has been the devolution of political power to the counties as this has meant expanding opportunities and a growth in wealth beyond urban centres. Devolution, for instance, has meant Ashitiva is also looking at taking the law firm beyond Nairobi and Nakuru to Kisumu and Mombasa.

Aside from the obvious increase in branches, Ashitiva Advocates LLP’s founder is also looking at ways to diversity by expanding the firm’s footprint in key sectors. To do this he is partnering with the global funding firm HIS Markit to form an autonomous subsidiary in the energy sector.

“There is a huge amount that has to happen around law and regulations across the region in the energy sector. There are opportunities in Kenya but also Uganda, Tanzania and South Sudan,” he says. And, it will be law firms which build on connecting investors to opportunities that remain competitive and thrive.

On this point, he says, Kenya is poised to become a financial services hub and a gateway to investment across the continent. Already Nairobi is positioning itself as a centre to access capital markets, raise project finance and to find law firms that were part of a regional network.

“Africa has many brilliant young minds who are keen to be part of a winning team that gives a decent return to their investor while benefiting the continent through quality products, creation of employment and value for the communities where they operate.”

What is most interesting is that it is always those who genuinely loved the continent and her people who did well.

“Yes, there are some who complain about corruption in Africa in every conversation but they are the ones who fail to see the many opportunities across this vast place. While it is true that corruption is a major challenge, the louder truth is that Africa carries within her endless opportunity.”