Step up to Right Wrongs

As a breast cancer survivor, the new head of South Africa’s Legal Resources Centre, continues the fight for the “unheard”. Tania Broughton reports. 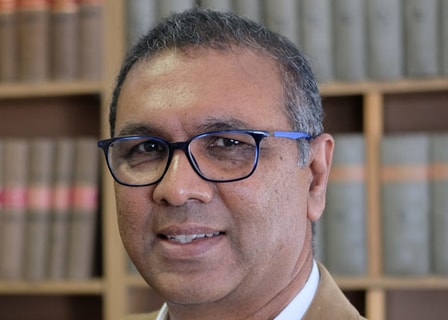 If you do an internet search of the name Nersan Govender - the newly appointed head of South Africa’s Legal Resources Centre (LRC) -  the first thing that pops up is that he is a cancer survivor.

“Essentially, globally, for every 100 women diagnosed, there will be one man diagnosed with breast cancer.”

And so, at the support group in Johannesburg which he chairs, he is the lone man.

The aim of the group, he says, is to provide support to people who don’t have it.

This pretty much sums up his attitude to life - and his job choices thus far.

“I believe in putting my hand up and doing something...paying it forward and not just take, take, take,” he said.

While his legal qualifications comprise a vast array of short legal courses, Govender has a social sciences degree and, since leaving a career in teaching, he has always worked in the legal field. He had to learn the law on the go to understand the work and the people that he managed. In addition, contributing to research papers and providing input into legislative amendments.

Up until his recent appointment to head up one of South Africa’s most respected NGOs, he spent 22 years in the labour law landscape, holding various management positions at the Commission for Conciliation, Mediation and Arbitration (CCMA).

Govender was part of the CCMA’s  “launch team” and the institution opened its doors in 1996 with the aim of providing quick and affordable labour dispute resolution.

“It was initially modelled on a similar organisation in Australia. But, within a year, we realised that this was misplaced and we had to re-organise it to make it more South Africa-specific.

“Our society is different. If you look at labour disputes in this country they are symptoms of legacy and history, with a strong and highly politicised trade union movement involved in the struggle and liberation of the people.

“The CCMA was dealing with socio-economic issues; they were more nuanced and not just cut and dried labour disputes.”

This recognition led to Govender’s involvement in the International Labour Organisation and SADC and he was part of several initiatives to draft legislation and set up dispute resolution bodies in other African countries.

“Labour is the cornerstone and fabric of society….labour issues have to be addressed. If there are no dispute resolution institutions in a country, nothing happens. There is nowhere for people to go to enforce their rights. It becomes a social justice issue.”

Govender says he thought he would retire at the CCMA but, at the age of 56, he took a “leap of faith”, and applied for the LRC job and, after a protracted interview process, was appointed on August 1 this year.

“The work resonates with me completely. At the CCMA, we were churning out 1000 cases a day. One case would take on average 26 days. It’s immediate gratification for the successful litigant.

“At the LRC, it’s more like a trickle of cases. And litigation can take years. But the difference is the impact. Our cases - be they about the rights of the vulnerable, gender issues, race issues or children’s issues - are high impact.

“We impact on legislation, we get precedent-setting judgments, we change law and through that society benefits,” he said.

Funding he concedes is a massive issue.

“Donor funding globally is drying up. In South Africa, four decades ago, the LRC was one of only very few NGO’s working in the public interest law space. Now there are hundreds of us, all vying for the same piece of the same funding pie.

“My aim is to keep one step ahead. We will have to reposition the LRC in terms of what is relevant. And we need to build partnerships with other NGOs and activist groups both in South Africa, Africa and internationally. Broadly we all have the same objectives. I believe we should not pull against each other but work together,” Govender said.

“We also have common issues, such as refugees….we can learn from them and them from us.”

Another challenge is the nature of the cases which the LRC handles.

“Some are highly political. Our founding document is the Constitution. So anyone who goes against that is someone we would tackle. But it takes courage. And sometimes, because of limited resources, we have to evaluate if the fight is worth it.”

Looking inward, Govender says he wants to build capacity within the organisation.

“We have a lot of young attorneys with no experience. I want to twin them with the more seasoned lawyers so they get exposure and opportunities.”

When he’s not at work, Govender - who has two grown up sons - says he spends most of his time in the “cancer space” where his CCMA experience has proved worthwhile.

“There is a need for labour laws to be changed so that there is protection for people who are diagnosed with cancer.

“I know of people who have been diagnosed in the morning and dismissed from work in the afternoon for flimsy operational requirement or incapacity reasons.

“A hairdresser, for example, who has a cancer treatment on a Friday and can’t work on Saturday - the busiest day - is at risk of being fired.

“In countries such as the UK and New Zealand, the employer has an obligation to provide you with the necessary support during your treatment period.”

Govender says “in a strange way” his work for cancer, his work at the CCMA and now at the LRC are very similar.

“We are the voices of the unheard. We provide support for those who don’t have support and we provide a service to the vulnerable. So, most of my life, I have been in that space.

“If there is a wrong, I don’t believe in waiting for others to do something about it.”