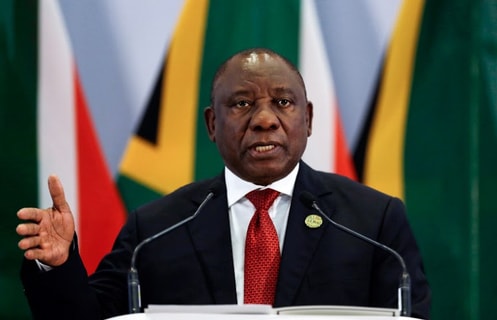 An affable nerd: that’s how one political commentator described South African President Cyril Ramaphosa during his State of the Nation (SONA) address in Cape Town this week.

But a geeky bookworm who respects the rule of law and has a keen eye on the treasury trumps a kleptocracy, hands down.

This week was Ramaphosa’s second SONA and, in the tumultuous year that has passed, he has kept a steady hand on the tiller considering his African National Congress has been beset by corruption scandals.

Almost anything Ramaphosa does is seen in stark contrast to his predecessor, Jacob Zuma, a man alternatively caricatured as a bumbling buffoon and an evil schemer who presided over almost a decade of state capture where his cronies looted key parastatals of billions of dollars.

Zuma’s SONA speeches in parliament were characterised by violent clashes and a total lack of decorum. His comrades cringed as he fumble through speeches appearing numerically illiterate.

This week Ramaphosa, a unionist turned businessman, may have delivered the longest SONA speech in post-democratic history (at over two hours), but he also charmed ratty opposition parties and inspired public confidence.

The 2019 budget for SONA, normally an extravagant red carpet affair with a gala dinner, was cut in half, according to SA Business Insider.

Ramaphosa’s leadership has largely been marked by statesmanship and austerity, though critics argue this is off Zuma’s shamefully low base.

Protests, however low key, are inevitable in a country where unemployment is at 28%, corruption seems endemic and public education is seriously wanting.

“Opposition parties were left with not much to say except that the proof would be in the pudding”.

In his speech, Ramaphosa said a key investment conference he hosted in October last year gave great impetus to a drive to mobilise R1.2 trillion ($88 billion USD) in investment over five years.

The investment conference attracted a third of that and foreign direct investment leapt from R17 billion in 2017 to R70 billion last year.

Ramaphosa said the National Prosecuting Authority would get an investigative directorate for corruption, effectively the re-establishment of the once feared Scorpions unit.

Political commentator Ferial Haffajee said Ramaphosa’s nerdish delivery revealed a “part of his style that is not often chronicled: he is a nerd and a workaholic in the style of former US president Barack Obama”.

She said his boring accounting to the nation put a diplomat or two sitting in parliament to sleep and rendered the normally querulous opposition sluggish as he entered the second hour of his delivery.

But, at least, he articulated detailed plans to grow the economy.

The dispirited South African public, might find political speeches boring, but they are amped by Ramaphosa’s eagerness in tackling corruption.

His “must be a presidency of reform,” Haffajee wrote.

Near the end of his speech, his “nerdish instincts ran loose”, she wrote, when he said he wanted all school pupils to have electronic tablets.

The proposal has been dubbed impractical since many schools don’t have electricity or functioning toilets.

But it represents a refreshing step change from Zuma.

Ramaphosa comes across as the perfect antidote to his predecessor: a debonair statesman attuned to the global economy and far removed from any association with a banana republic.

A young nation, Ramaphosa said, faced a stark choice: being overtaken by technological change or “harnessing it to serve our aspirations”

“Unless we understand the nature of the profound change that is reshaping our world, and unless we readily embrace the opportunities it presents, the promise of our nation’s birth will forever remain unfulfilled,” he said.