Uganda Supreme Court Judge Esther Kisakya has accused Chief Justice Alfonse Owiny-Dollo of using “barbaric means” to prevent her from reading out a dissenting judgment in favour of a petition by opposition leader Robert Kyagulanyi challenging the outcome of the country’s elections. Tania Brought reports. 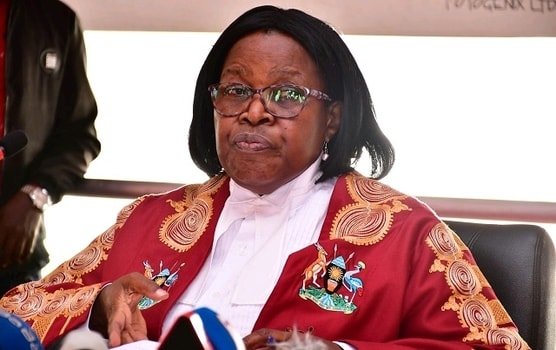 Kyagulanyi - also known as Bobi Wine - petitioned the court to challenge President Yoweri Museveni’s victory, but asked that he be given time to amend it, introduce new grounds and file additional affidavits.

He then sought to withdraw it. He said his lawyers were operating in “mobile firms”, fearful that state operatives may steal evidence. The operatives had also taken over their political party offices which made it impossible to file the evidence in support of his petition on time.

Eight out of nine of the judges dismissed the petition and held that it could not be amended because of strict timelines within which such a court application had to be heard and determined.

“The petition is withdrawn. The candidate (Museveni) is declared duly elected as President.

Each party will bear their own costs,” the Chief Justice pronounced.

But Judge Kisakya did not agree.

She remained behind after the other judges, and most of the legal representatives,  left the courtroom.

In a video on YouTube, she said her dissenting judgment had been on the bench but had been removed.

She adjourned to fetch a copy.

When she came back, the courtroom was locked and the microphone system switched off.

She found a way in and proceeded to explain her version about what had occurred.

She said her fellow judges had “elected not to be part of the rest of proceedings”.

“My file was apparently confiscated on the orders of the Chief Justice.

“I am working from a duplicate copy. I am very surprised that he has chosen such barbaric means,” she said.

“The Chief Justice directed me that my ruling would be read out at a later stage after he and other members of the court had properly vetted it.

“I find that order unconstitutional and I chose to disobey.

“When I was appointed as a Judge in 2009 I swore to uphold the Constitution of Uganda and I took the judicial oath.”

In her dissenting judgment, she said his Kyagulanyi’s applications should have been allowed because of the “unusual circumstances” and the so-called strict timelines for amending petitions had been dispensed with in other, similar matters.

A spokesperson for the judiciary, interviewed on the video denied that the Chief Justice had acted improperly.

“It is not true that he confiscated any file…. The reason they (the other judges) did not come back is that they asked her to share (her judgment) and she declined to share.”

President Museveni will be sworn into office in May for another five years.