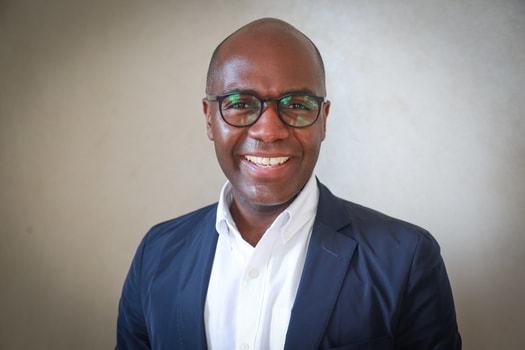 The London lawyer runs Prime Advocates, a boutique legal firm that advises big corporates on how to invest in good causes around the world.

But while ESG (environmental, social and corporate governance) might be the global buzzword in business, it’s seldom fully appreciated.

What probably started out as a sop to doing the right thing has transformed into enlightened self interest: firms that are ethical and just are mostly sustainable and profitable.

Ghanaian-born Murphy was raised in England. His parents were entrepreneurs and his family back in Ghana include a cabinet minister and the head of a global non-governmental organisation.

A practising Christian, Murphy trained as a lawyer.

He holds a higher LLB in Law from Bristol University.

After graduating he worked for banks specialising in the legal aspects of securitisation and capital markets. He interned for the Citigroup followed by time at Morgan Stanley, Bear Stearns and JP Morgan as well as international law firm Weil Gotshal and Manges.

Among the bigger clients Murphy dealt with was water charity,

The One Drop Foundation, and his keen interest in the field prompted him to establish Prime Advocates in 2012, a non-profit organisation that has a dividend lock. As the major shareholder, he decided dividends would be plowed into fields the firm works in.

Murphy has amassed a wealth of experience in the social financing space, described as an approach to managing money which delivers a social benefit. He worked on the ISLA (International Securities Lending Association) stock lending/ borrow initiative and helped re-draft EU policy (representing JPMorgan) relating to default enforcement and asset protection and lending in the post-Lehman era as an example of his macro structural expertise.

He has worked with homeless people in the UK and describes his firm’s mission as growing the “impact investing ecosystem”.

They strive to make the planet and people’s lives better by breaking down barriers to social enterprise innovation.

If that sounds more than a tad airy-fairy, Murphy concedes, the field is awash with do-good sentiment and tons of jargon. His personal motivation is prompted by his religious background, dutiful family and entrepreneurial parents.

His mother is a seamstress by trade. She was a hard working immigrant and financially things were not always easy, Murphy says.

“I consider myself one of the lucky ones. I was made to realise wealth is fleeting and it isn’t necessarily the most important thing in life. I like nice things, but I have never wanted wealth for the sake of wealth.

“My exposure to innovation is wonderful. There is fascinating work going on around the world that is truly empowering, beyond any do-good sentiments. There are commercial structures being developed that benefit people and reward ingenuity. More big corporates are pledging to become involved in that space because it is the right thing to do.”

“To be truly impactful you need to balance sustainability and longevity. A lot of the places we are invested in are undervalued. Look at something as basic as water - things that are water efficient will have increasing value.”

The same goes for education. Impact investing in these fields helps apply market forces and business growth to what is traditionally a high risk investment: charity.

But it is not simply charity. Recycling and reduced energy consumption, for example, have long term, often profitable benefits.

Murphy says there’s no one poster child for impact investment.

Solutions vary from country to country and one has to be cognisant of local and international laws when partnering corporates with social entrepreneurs.

“We work around the world. It is tricky to say where the biggest impact of funding is being felt and why.  Comparisons are difficult because conditions are different. Environmental solutions are generally big. They are transformative in ways that we are only starting to appreciate. Things like micro financing, which started 30 years ago and were highly scaled and had a positive impact, are reaching maturity. Now big pension funds are demanding their investments are lucrative, but also take account of environmental, social and governance factors.”

One programme Prime Advocates is involved in is Women of Impact, a 12-month training, mentorship, advisory and acceleration programme. The initiative pairs women-empowering social enterprises with teams of lawyers and business professionals who serve as mentors and help address barriers to growth through the provision of pro bono advice and business support. This is underpinned by a series of training modules and networking opportunities. One participant in this programme is Birdsong: an online brand for fashion made by women's organisations with a sweatshop-free supply chain and includes elderly knitters and migrant seamstresses. Birdsong connects these makers to a growing online audience of conscious consumers. Another participants is HERA (Her Equality, Rights and Autonomy), which provides entrepreneurship training, professional mentoring and grants to women survivors of human trafficking, violence and exploitation.

Murphy says the barriers to women-led businesses impacts their confidence and businesses they lead. He says only 5% of venture capital funding goes to women-led startups. Which is why Prime Advocates supports nine social enterprises through Women of Impact, which has involved 900 hours of pro bono work.

Another example of Murphy’s sustainable business philosophy is Prime Advocates’ investment in the Osei Academy (www.osei-academy.com) in Ghana. This is a transformative vocational school working to help West Africans export garments internationally. It does this through skills training for workers that enables them to produce to a global standard while supporting local business development.

The appetite for social finance and impact investment is growing, but there are obstacles to growth, Murphy says.

“There are complex legal structures and lack of industry standardisation. We have expertise and passion for the sector so we can defuse these and pave the way for positive social change. We believe in a world where financing positive change is a top priority for all, not a nice-to-have, or a box to tick; a world where sustainable business is the norm, not the exception.”