How black lawyers in South Africa shaped thinking on human rights has been outlined in a massive new work, The Land is Ours, (published by Penguin Random House). Author, Advocate Tembeka Ngcukaitobi, speaks to Africa Legal 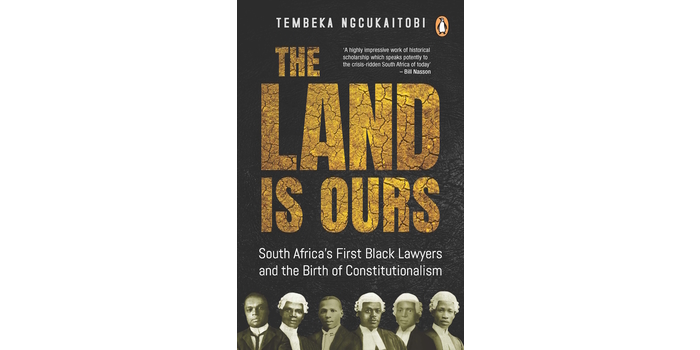 The book is credited for filling in missing historical knowledge on black thinking around equality, human rights, land ownership and the laws associated with them. It also gives added historical context to the shaping of the South African Constitution, regarded as among the world’s most progressive.

In an interview with Africa Legal, Ngcukaitobi said his experience as a human rights lawyer and law student set him off on the journey to find out about African thinking on concepts and issues he was grappling with every day.

“Most of my courses at university, such as the law of property were presented through Eurocentric lenses, which neglected contributions of Africans. Human rights norms were also presented as if they emerged in Europe. The key players in the emergence of human rights ideas were also mainly white men. It always sounded rather inexplicable that black lawyers had no role in the development of the ideas of equality, freedom and dignity, yet they were at the coalface of oppression.”

He began his research for The Land is Ours in 2009 and, after five years of travelling between South Africa, the United Kingdom and the United States,  trawling through volumes of colonial and apartheid-era documents and reading everything he could around the subject, was ready to write in 2014.

The book is divided into three parts - how Africans lost their land, the stories of three lawyers who imagined a new world order of equality and human rights and, finally, their legacies of constitutionalism and vision for the future. He chose to channel the major themes through short biographies on Alfred Mangema, Pixley ka Isaka Seme and George Montsioa to “illuminate the triumph of the personal spirit in the face of an aggressive and oppressive state”.

“The story of the emergence of the ideas of constitutionalism, rule of law, equality and freedom could only make sense if embedded in the personal story,” he says.

The global historical context he gives is eye-opening, especially how thinking on human rights had reached its pinnacle in 1941 during World War II with the publication of the Atlantic Charter authored by Winston Churchill and Franklin D. Roosevelt. The Atlantic Charter ultimately laid the foundations for the United Nations and its Universal Declaration of Human Rights.

The charter makes it clear that among the goals of the war were self-determination, no territorial changes made against the wishes of the people and self-government.

“But where did Africans fit in,” Ngcukaitobi asks.

The Land is Ours opens with the image of black intellectuals, including some of South Africa’s first black lawyers, meeting in the heat of Bloemfontein in 1943, with the backing of the African National Congress, to discuss a response to the Atlantic Charter and how Africans would be accommodated. From the meeting emerged the African Claims which would go onto become the Bill of Rights and ultimately the Constitution.

Ngcukaitobi’s  research lays bare the duplicity of imperial Britain and Churchill who obliviously neglected the plight of Africans in Britain’s colonies when conceptualising the charter.

As Ngcukaitobi said in a radio interview recently, “The Atlantic charter was simply a response to what happened with the Nazis.”

The African fight for self-determination, basic human rights for all and equality before the law were battles that would dominate across the continent for the second part of the century.

In South Africa the issues of constitutionalism and black land ownership remain on the table. After 1994, when the apartheid government was dissolved, a bitter taste remained in the mouths of many on the issue of black land ownership. In the negotiated settlement the bulk of land remained in white hands despite subsequent poor efforts by the government at compensation. In recent weeks the issue has been back in the headlines with moves to change the Constitution (section 25) to allow expropriation without compensation.

Ngcukaitobi’s view on land is clear by his book’s title but, despite this, he does not see the Constitution as a stumbling block to comprehensive land reform.

But, he says, an amendment to section 25 would not necessarily throw it out of alignment with international norms or the balance of the Constitution.

“I think an amendment to make it explicit that in limited circumstances – to be defined in legislation – the state has power to expropriate land without compensation is a defensible stance to take.”

The obvious question, and with Zimbabwe’s land-grabbing situation in mind, is how to prevent the political elite from being the sole beneficiaries at the expense of the poor.

“The amendment must make two provisions clear. First, the land must always be expropriated for eventual transfer to those who work in it. Second, any decision on expropriation must be subject to judicial oversight to avoid capture by the elite.

The political rhetoric, especially from Julius Malema, commander in chief of the Economic Freedom Fighters, is to remove whites without compensation. Ngcukaitobi explains clearly what the law says.

“In terms of the Constitution, land distribution takes place in three forms: restitution, security of tenure and redistribution. Restitution focusses on claimants who can prove dispossession after 19 June 1913. Most of these are black claimants affected by the 1913 Natives Land Act, and the claims tend to be against land owned by white land owners.

“Redistribution focusses on land hunger – it is intended to assist everyone gaining access to land on an “equitable basis”. Race is not a factor, but the reality of South Africa is that it is blacks who do not have access to land, and who will be primary beneficiaries of any land redistribution process. Security of tenure focusses on restoring tenure rights to those whose tenure was undermined by racially discriminatory laws. Again, because of history, most beneficiaries of security of tenure programmes will be black people.”

Ngcukaitobi was born and grew up in Cala in what is now the Eastern Cape of South Africa but was then the Transkei. His mother Nomsa was a domestic worker in Cape Town then a teacher at a school for the disabled and later a nurse. His father, Gcinabantu, was a mineworker, and at the time of his death in 1983 a clerk at the Magistrate’s Court. Ngcukaitobi started his law degree at the University of the Transkei and completed his LLM at Rhodes University in Grahamstown. His career started at the Legal Aid Clinic in Mthatha and the Legal Resource Centre in Grahamstown before he was appointed as a clerk under the Chief Justice Arthur Chaskalson. For several years he was at Bowman Gilfillan before spending a year (2007/2008) at the London School of Economics and Political Science. Thereafter he joined the Johannesburg Bar to practice as an advocate. He was also director of the Constitutional Litigation Unit at the Legal Resources Centre for three years.

Despite this work load he pursued his writing project with passion, working from 8pm to 11pm every week night and in a block of time on a Sunday.

Yes, he admits, he does relax by watching football, reading and “lately teaching myself to swim in my home pool”.

His next project is already well underway – a biography of the founder of the Pan Africanist Congress, the lawyer Robert Sobukwe, his encounters with the law and the cases he took on.

*The Land is Ours can be bought on Amazon and is available for download. Prices vary from GBP10 to GBP17.