A 15-year-old Rastafarian schoolgirl has won the right to keep her dreadlocks and has scored official recognition of her religion in Kenya. Tania Broughton reports. 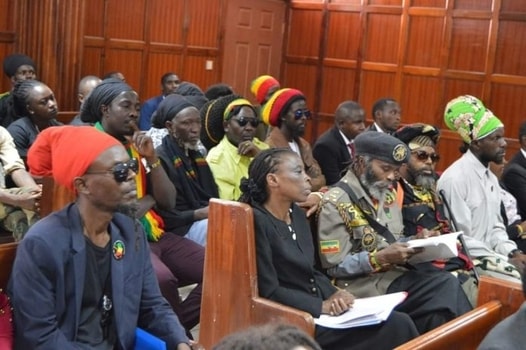 Rastafarians before the High Court in Nairobi on Friday September 13,2019/PHOTO BY S.A.N.

“It is the first-ever case of its kind in Kenya.” That is what constitutional and human rights high court division Judge Enock Mwita said of the matter launched by the unnamed learner’s father after she was excluded from school at the beginning of this year.

The teenager, who was admitted to form one at the secondary school, stated in her application form that she was a Rastafarian. She paid the required fees and she began lessons.

But a few days into the term, she was sent home, and told to “shave her hair”.

Her dad went to school the next day and tried to reason with the headteacher but was turned away without a hearing.

In his oral evidence, the father explained that his family was all Rastafarian from birth.

The teachings, he said, prohibited eating of certain food and cutting hair “as a sign of dedication to God’s teachings and a manifestation of faith”.

No-one in his family, including his daughter, had cut their hair since birth. He argued that “rastas” were different from dreadlocks. The former was a sign of faith and the latter “one’s choice or style”.

“She attended nursery school and primary school wearing rastas,” he said, arguing that she was being deprived of her constitutional rights to practise her religion and to an education.

The school and the Ministry of Education argued that the father and daughter were “bound by the school’s rules” and the dress code was part and parcel of the school’s management.

They alleged the teenager had worn a hijab and told teachers she was Muslim.

“But then the hajib fell off revealing the rastas. She was told she could attend classes for the day but was advised to comply with the school’s rules the following day,” their lawyers argued.

Judge Mwita, in a significant ruling in September, found that Rastafari was a religion and was thus protected under the constitution, just like other religions.

The judge said “it was plain” that the demand for the learner to cut her hair was unconstitutional because her rastas were an outward manifestation of her religious beliefs.

The constitution also guaranteed the right to education and this could not be compromised on the basis of a religious belief or the manifestation of that belief.

“And yet she finds herself torn between choosing the right to keep her rastas or forgoing her right to education because of school rules. This is a clear violation of her rights.”

Judge Mwita said there had to be a balance between school rules, rights, and fundamental freedoms.

He directed the school to re-admit the learner and granted an injunction to prevent any further discrimination against her for her religious beliefs.