A “snapshot” survey of how judiciaries in South Africa, Malawi and Namibia are faring has found that judges in all three countries need better “tools of trade”, writes Tania Broughton. 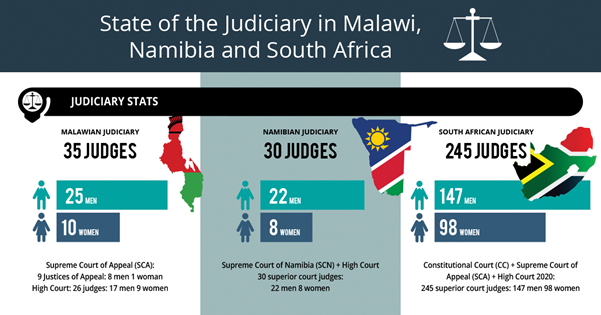 The research, undertaken by the Democratic Governance and Rights Unit at the University of Cape Town (UCT) with donor funding, was initiated on the understanding that the well-being of the judiciary is essential to the well-being of both the state and its citizens.

The subsequent report, released this week, detailed the experiences of court users, perceptions of the judiciary and potential biases. A key finding was that the jurisprudence produced by the courts contradicted general public perceptions that courts lacked independence. An example of this was the ruling in Malawi which overturned the 2019 presidential election results.

Perceptions of corruption in the courts were significantly lower in the survey than in opinion surveys of the general population. The overwhelming majority of respondents in all three countries said they felt that court proceedings were easy to understand and that judges “listened to all sides of the story”.

“While South Africa had the best results, all three jurisdictions fared well. These findings should give comfort to judges in all jurisdictions that their work is acknowledged and appreciated by users of the courts,” the report said.

Significantly, South African judges surveyed said the Office of the Chief Justice, which was supposed to provide administrative support, was more of a hindrance than a help, and that it had added another bureaucratic layer.

These criticisms were echoed by South African judges. They said tools of the trade, including online resources and digital infrastructure were lacking, and they complained of breaches of online security which threaten the sanctity of emails.

Judges in South Africa and Malawi also expressed dissatisfaction with their salaries and benefits.

“Increases in workload were highlighted to some extent in all jurisdictions. One way to address this is through assistance from researchers and other support staff. The ratio of researchers to judges is very good in Namibia, but less so in Malawi and South Africa, with reports of researchers becoming overworked and not meeting deadlines,” the report noted.

“Looking at the three jurisdictions combined, we identified the major challenges highlighted by judges as a lack of sufficient tools of the trade, insufficient judicial numbers and increasing caseload, issues relating to the quality of assistance provided by support staff, and building infrastructure.”

The report proposed several recommendations including better judicial training to enable judges to be “responsive, good listeners, and to communicate clearly with litigants” which would help to build trust and perceptions of fair treatment among citizens. Training of legal researchers, through the Judicial Institute for Africa at UCT, also needed to be strengthened.

“Subject to budgetary limits, all necessary steps should be taken to address issues of access to tools of the trade, and shortcomings with building infrastructure,” the report concluded.