One of Kenya’s leading lawyers, Esther Omulele, was appointed Managing Partner of the award-winning Kenyan law firm MMC Asafo in November 2019. She spoke to Carol Campbell. 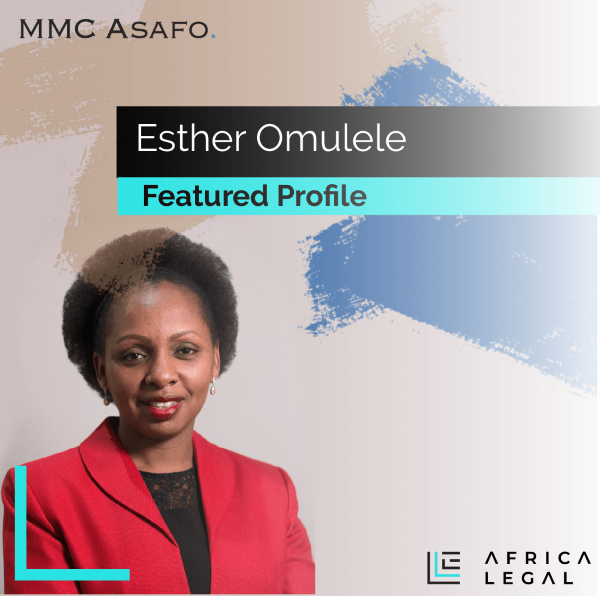 “The most enjoyable part is looking after our people,” says Omulele who, before she took on the job, was head of MMC Asafo’s commercial and property department.

“Right now my priority is ensuring we have the right team and that they are working in an environment conducive to attracting and retaining the best talent. When the team is right, our service offering will deliver value to our clients.

The administrative part of managing the business comes next.

“This is about ensuring the right processes and systems are in place and that we are running a profitable operation.”

MMC Asafo has 12 partners and 35 lawyers and last year it was named Litigation and Dispute Resolution Team of the Year at the African Legal Awards in Johannesburg.

It has offices in Nairobi and Mombasa but, with its association with the global firm, Asafo and Co, it is also represented in Cote d’Ivoire, France, Morocco and South Africa.

“With this association we make up 100 lawyers with 32 partners,” says Omulele.

The firm is broad and busy. It offers services in a host of practice areas including: mergers and acquisitions, project development and PPPs, banking, finance and fintech, capital markets and sovereign borrowing, intellectual property, dispute resolution and international arbitration, family law and estate planning, labour and employment and, one of the biggest, real estate. Other practice areas such as mining, energy, oil and gas, innovation and technology are led by the Asafo arm from Paris and Casablanca.

The new managing partner has a reputation as one of Kenya’s leading legal brains and is ranked as such by Chambers Global and IFLR 1000.

Aside from her work at MMC Asafo, Omulele serves on several boards as company secretary and is also a corporate governance auditor.

One of the biggest deals she has been involved with has been advising Tatu City Limited, one of the largest property developers in East Africa, on the structuring of a property development across 10 000 acres on the outskirts of Nairobi.

She was also part of the team that advised on the sale of the 25% stake held by Kenya’s government in Safaricom to the public and the subsequent listing of the company on the then Nairobi Stock Exchange.

She was also involved in advising the Privatisation Commission on the privatisation of five government-owned sugar companies.

For the National Oil Corporation, she advised on the acquisition of BP Kenya Limited’s retail service stations and was involved in the multi-million dollar acquisition of certain assets of Total-Chevron Kenya.

Omulele said she knew she would be a lawyer when she was 11-years old. Her father, Elijah Njiru, was a court clerk and he coached his youngest daughter in the skills of debate in the evening when he came home from work.

“I would sit next to him, on the arm of the couch, and he taught me how the lawyers in court put across their point. He said I argued well enough to make a good lawyer,” she laughs.

When it came time to register for a law degree, at the University of Nairobi, Elijah accompanied his 18-year-old daughter.

“That was the last time he took me to school. He just wanted to be sure I was in and on my way.”

When Omulele eventually qualified, her father stepped in again to guide her on where to work.

“He wanted me to work for the government where I would be assured of a salary but I wanted to go into private practice.”

The young lawyer joined Hamilton Harrison and Mathews, a top tier firm in Nairobi, and then later IKM. She joined MMC (before it had joined Asafo) in 2004 to help with the launch of its real estate department as well as the banking and finance department.

Omulele is married to the Kenyan MP Christopher Omulele and the couple have three children.

“So, outside the law firm I wear a different hat as I also help my husband with his constituency work.”

Her father, who still lives in Embu where Omulele grew up, regularly calls on his daughter for her opinion on political and economic issues.

Omulele says that what drives her in her new mandate is empowering young lawyers by introducing them to practice areas they might never have considered. Her second objective is to propel the firm further into the global arena so that the team can participate in larger and more complex transactions.

Following in the footsteps of many strong Kenyan women she is passionate about uplifting girls, especially by encouraging them to consider law as a career. “Many young women do not make partner – often because of the demands placed on them beyond their career. I can attest to the fact that the hand that rocks the cradle rules the board room!”