The youth vote will be crucial in this week’s Ugandan presidential and parliamentary elections which has been described as a “generational clash”. Tania Broughton reports. 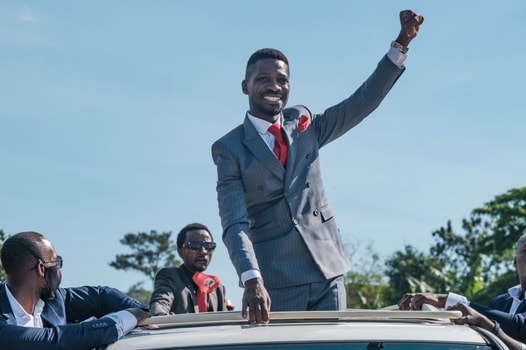 Three quarters of the approximate 17.6 million voters in the East African country are under the age of 30. And, with President Yoweri Museveni, now 76,  seeking a sixth term in office, he is the only leader they know.

But, his main opposition, former pop star 38-year-old Bobi Wine, hopes to snag their votes, with promises of change from the top, of giving them a voice, jobs and hope for a better future.

Museveni, on the other hand, is offering them stability and, he says, he has a proven track record of 34 years in office.

It’s been a violent run-up to the election.

Museveni banned public rallies because of the Covid-19 outbreak and then, many political analysts have said, used this to clamp down on the opposition.

Wine himself was arrested in November last year - allegedly for breaking lockdown rules - sparking protests in which more than 50 people died allegedly at the hands of security forces.

International watchdogs, including Amnesty International, have said measures implemented ostensibly to fight Covid-19 were being applied selectively to prevent the opposition campaigning effectively.

According to the Africa Report, last week Wine and his lawyers announced they had filed a complaint against President Museveni at the International Criminal Court (ICC).

During the Zoom press conference, he was reportedly repeatedly harassed by a police officer while he sat in his car.

The Guardian newspaper reported: “The contest is being keenly watched across the continent, where veteran leaders are coming under pressure to give way to politicians more representative of Africa’s increasingly youthful, urban and educated population.

“Wine has explicitly linked his campaign to efforts elsewhere across Africa to oust veteran leaders.”

Wine has been quoted saying: “The oppressed people can’t stay oppressed forever. History has taught us that even the most brutal and famous dictators have come down, crumbling to the power of the people.”

But, the Guardian points out: “Wine faces an experienced opponent who can count on loyalty from individuals and institutions that have benefited from his rule over decades.”

Analysts also point to the growth and stability in the country under Musuveni’s rule.

AP reports there has been no reliable polling ahead of election day on January 14.

The news agency says that Museveni is thought to enjoy solid support among older Ugandans, particularly in the rural areas, but Wine’s ability to draw huge crowds in rural areas had been a surprise, dispelling the belief that he represented only the urban poor.

The Guardian says, however, that many believe Museveni will win the contest - but could emerge weakened resulting in instability in the country.

And, as the BBC points out, this will have repercussions for international relations, particularly with the US which is its main partner in fighting militants in East Africa.

“In Zen Master, Lao Tsu’s classic work, The Book of the Way, he writes ‘With no hoped-for preconceptions there’s no problem disagreeing’.”

Kenneth said what was needed now was reasoned discourse and respectful disagreement.

“With the divisive nature of the electoral process world over, where it is now common to see disagreement along the lines of ‘them versus us, the haves and have nots’, my plea to Ugandans is to choose the path of progress, which is the path of peace.”

He emphasised that post-election, should a candidate feel they deserved to win, then it should be “our venerable courts of law” that provided the arena where disputes were resolved.