British lawyers and businesses look to Nigeria for new partnership opportunities in the legal sector. 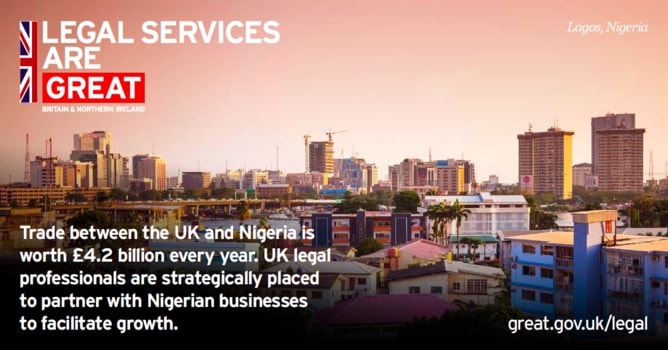 A trade delegation from the United Kingdom’s Ministry of Justice, focussing on the legal sector, is in Lagos this week (April 1-3, 2019) to promote partnerships between lawyers in the two countries.

The campaign was launched in Nigeria by British Prime Minister Theresa May during her visit to Africa in 2018.

According to the UK Ministry of Justice the launch comes at an opportune time; trade between the UK and Nigeria was worth £4.2 billion in 2017 and is set to double by 2030.

There will be a series of seminars covering topics of interest to the profession in both countries including dispute resolution.

Twenty UK lawyers and businesses connected to the profession and from a cross section of different firms in England and Scotland were included in the delegation.

The Journal of the Law Society of Scotland reported last week that one of those on the trade mission was Edinburgh-based solicitor Laura Tainsh, from the law firm Davidson Chalmers. Tainsh, an expert in waste management, told the publication that Nigeria offered a market where specialist legal expertise in waste management, energy and environmental law was in demand.

Tainsh told the publication: “I look forward to sharing knowledge and discussing key issues with our hosts as well as developing further global connections for the firm through our Globalaw (an international network of lawyers) affiliation."

Joshua Siaw, a partner in White & Case’s Global Banking Practice and Director of the Firm’s Africa Practice, accompanied Theresa May on her visit to Nigeria. He wrote in an online article for the Ministry of Justice in September last year that the current conversation about Africa was all about opportunities and new ventures.

“The often-misguided perceptions of economic uncertainty are beginning to shift. Its young and growing population, vast resources and largely untapped markets offer a wealth of prospects for international investment and most certainly for our UK legal services.

“Nigeria in particular is a burgeoning market for UK legal services. The nation has consistently been ranked as one of the top three destinations for foreign direct investment in Africa. As the most populated country on the continent with approximately 186 million inhabitants, it has potential to become one of the largest economies.”

Activities this week will also include networking receptions, one-on-one business meetings and a dinner at the British Deputy High Commissioner’s residence in Lagos.

Nigeria is the largest economy in Africa with oil and agriculture its biggest sectors. The port city of Lagos is one of the fastest growing in the world with an estimated population of 21 million.