Locusts Have No King

There is no respite from the waves of desert locusts destroying agriculture across East Africa, with more expected. Food security in the region is now under threat writes Judy Waguma from Nairobi. 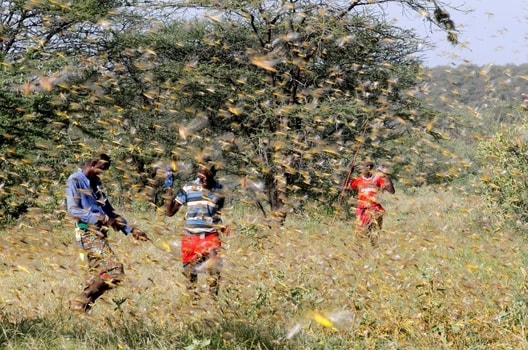 The Food and Agriculture Organisation of the United Nations (FAO) said in its most recent briefing that the situation “remained alarming”.

“Specifically Kenya, Ethiopia and Somalia where widespread breeding is in progress and new swarms are expected to form in the coming weeks.”

Kenya’s online Business Daily said the Treasury had described the invasion as a “systemic risk” that could damage the economy.

The publication reported the Treasury saying that the invasion could lead to higher inflation that could slow economic growth.

The locusts have already destroyed thousands of hectares of crops threatening food security for more than 20 million people.

The FAO has raised its global appeal for funds to Sh13.9 billion, from the initial Sh7.6 billion to assist the affected countries. It has received Sh3 billion so far including $10m from the Bill and Melinda Gates Foundation.

Joseph Ngodi, a farmer, environmentalist and investor in Kitui County, one of the worst hit regions in Kenya said, “Locusts have passed here twice, but up to now, we have not seen a single one die.”

“The first wave came in December, grey locusts, then came the second swarm, yellow in colour, once they landed everything green was gone. We chased them away, shouting and beating drums but only sent them to our neighbours’ farms.”

Locusts move at high speed  – even faster on the wind – easily covering 150kms a day. There are more than 80 million per square kilometer eating enough food in one day to support 35,000 people.

Professor Nderitu John, an agricultural entomologist at the University of Nairobi, said the desert locust had come from fragile regions where pest control interventions were impossible.

“The swarms started in Saudi Arabia, passed through Yemen, Ethiopia then Somalia into Kenya and spread to Tanzania and Uganda with new cases reported in South Sudan and now the DRC,” he said.

“Besides spraying using organophosphate chemicals, there is nothing we can do, but wait. The concern is that the first generation swarms are already hatching. We have to get rid of the young ones, or they will grow 20 times more by June and that’s the critical time for farmers. If we don’t then we could see a drought worse than what was experienced in 2016,” Professor Nderitu said.

Gerald Githinji, a lawyer in Kenya said: “How are the Desert Locust Control Organization - EA and the FAO involved in the current campaign and how much have they spent? Kenyans need to know.”

On social media across East Africa #locusts has been a hot topic as locals look to the sky as the black swarms pass over.

Kevin Reis tweeted: “In December the government said it was ready to combat the locust invasion, in January they said they are doing all they could, in February they gave up and told us ‘watakufa tu juu wamezeeka’ (they will die of old age)."

Mukara Isaac tweeted: “The government can invent means of harvesting the locust which can be processed into fish and chicken feeds.”