Lawyers and Firms recognised at Gala Awards in South Africa

The African Legal awards were held in Johannesburg at the weekend - a team from Africa Legal was there to recognise those among the brightest stars on the continent. Tania Broughton reports. 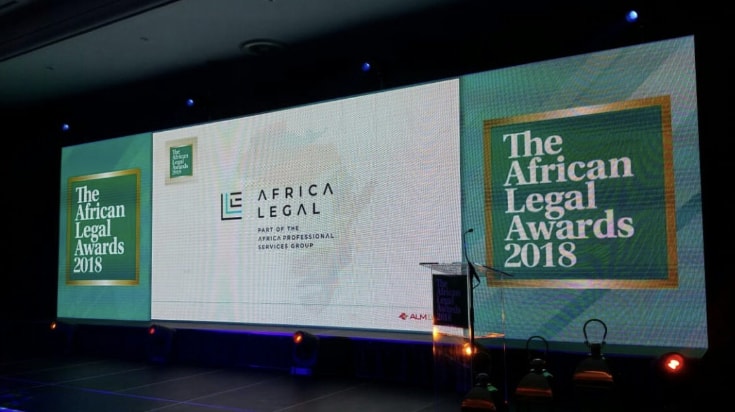 The evening is over, but the memories will remain and Africa’s top law firms and lawyers - recognised at the prestigious African Legal Awards ceremony in Johannesburg on September 7 - are now proudly displaying their trophies.

Twitter hashtag  #Africanlegalawards  was a flutter as Africa’s best and brightest legal minds were announced by journalist and TV presenter Jeremy Maggs - and they rose to their feet  for Judge Edwin Cameron who was honoured with the Corporate Counsel Association of South Africa (CCSA) lifetime achiever award.

Presenting the award, CCASA president Howard Snoyman, head of legal and regulatory affairs at Discovery Health Medical Scheme, said: “Judge Cameron, with his combination of exceptional legal learning skills, proven commitment to a democratic South Africa in its transformation and his personal courage, must be acknowledged as, in the words of Nelson Mandela, ‘one of South Africa’s heroes’.”

True to form, the South African Constitutional Court judge - known for his HIV/AIDS and gay-rights activism - spoke from his heart.

“I am lucky, I am filled with a great sense of good fortune. I came out as a gay man in a time of great horror and repression for LGBTI people, and I don’t say that for a self-indulgent reason – I say that because, outside of our cocoon in South Africa, there are still problems for people who are LGBTI,” he said.

Another special award - the CCASA Achievement Award - was given to the Stellenbosch University Law Clinic “for striving to improve access to justice for poor and marginalised communities through free legal services and education”.

This year’s awards - hosted by the CCSA and Legal Week (organisers of the British Legal Awards) aimed to recognise achievements within the legal community at a time when the sector is going through a period of rapid change.

“As African economies grow and diversify, local and international lawyers are presented with both opportunities and challenges as they seek to underpin this expansion with sound legal advice,” the organisers said.

The awards also give a fascinating insight into some of the biggest business deals and developments happening in Africa.

The big winners of the night were International law firm Baker McKenzie and South Africa-based Bowmans.

Baker McKenzie was named International Law Firm of the Year for “positioning itself as the global law firm of choice for Africa, boasting more than 100 lawyers on the ground and an impressive roster of high profile international brands”.

Bowman’s was named the Africa Law firm of the Year (large practice) for advising on some of the biggest deals and most complex legal matters on the continent over the past year.

It also took the prizes in three other categories: property and construction - for advising in the development of a new built from scratch modern city in Kenya as part of the Vision 2030 economic programme;  TMT team for advice on a broadband boosting deal in Africa; and energy and natural resources for a “tricky” mining deal.

The African law firm of the year (small practice) was named as Manokore Attorneys, “which is well on its way to achieving its goal of becoming the foremost corporate legal services provider in Zimbabwe”.

Webber Wentzel’s head of pro bono Moray Hathorn “lauded by his peers for tirelessly pursuing justice for those in society without a voice”, was named Attorney of the Year (partner).

The firm also scooped two more awards in the banking, finance and restructuring category for advising a number of local banks in one of Sub-Saharan Africa’s largest and most complex cross border project finance deals, and the CSR, diversity, transformation and economic empowerment category for its dedicated pro bono practice.

Attorney of the year in the associate/assistant category was awarded to Darryl Jaco of Hogan Lovells (South Africa), who is a “role model inside and outside the firm, dedicated, hard working and passionate about providing client services”.

Another South African firm, ENS, also won three awards for: employment law (handling a difficult retrenchment process) ; IP (for helping a client compile a due diligence report, which included the value of its trade secrets, during a sale to a private equity bidder); competition and regulatory (for advising on one of Africa’s largest ever M&A deals in the insurance sector).

Use of technology was under the spotlight in two categories. Best use went to Law for All for its adoption of “artificial intelligence enabling it to resolve almost a third of cases autonomously, freeing up lawyers to spend time on more challenging matters”.

And the Innovation award went to Exigent Limited, for its efficient use of technology to deliver groundbreaking due diligence legal services to his client as a significantly lower price than its competitors”.

Specialist Law Firm of the year: Harris Hadar Inc - “for carving out a reputation as one of South Africa’s leading boutique properly law specialists”.

Junior Corporate Counsel of the year:  Naomi Kasi Mue of the Adrian Group Ltd, in Kenya “a patient and courteous lawyer who has to juggle in-house legal matters for eight different companies with the overall group”.

Senior Corporate Counsel of the year: Faith Damilola Adesua, of Guinness Nigeria,PLC, who is described as a “dependable and outstanding business partner who provides intelligent, commercially-orientated legal support”.

General Counsel of the year: Tinuade Awe of the Nigerian Stock Exchange for “impeccable leadership skills in overseeing a number of innovative projects that helped shape the operating and regulatory environment”.

Legal Department of the Year (small team): Life Healthcare for steering the company through a number of M&A transactions.

Transport and Infrastructure: White &Case LLP: For advising the developers of a multi-billion port and railway project that will transport coal from Mozambique to Malawi, the largest ever infrastructural deal in Africa.

Environment and Renewables: Aluko Oyebode. For advise on the development and financing of a grid-connected 100 megawatt solar plant in Nigeria.

M&A: Anjarwalla & Khanna: For advising a consortium of private equity investors on the purchase of a minority stake in a listed East African financial services group that operates across seven African countries.

Litigation, dispute resolution: LNP Attorneys Inc. for negotiating a settlement to avoid a drawn-out contract dispute which saved client both time, money and its reputation.

African Network/Alliance of the Year: ALN (Africa Legal Network): For its focus on integration and collaboration across several jurisdictions.