Lawyering Up a Movement

In the first of a three-part series on the crucial work being done by South Africa’s Equal Education Law Centre, Tania Broughton looks at the role of “movement lawyering”. 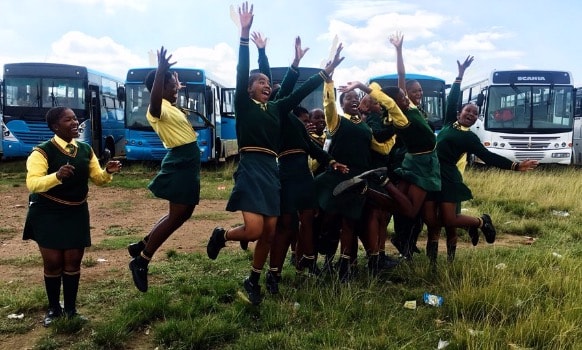 To tell the tale of the Equal Education Law Centre (EELC), one has to begin with the activist group Equal Education - a social movement of approximately 5000 high school learners in five provinces in South Africa - who know better than anyone else their challenges.

The constitution holds the promise of education for all. But the reality at many South African schools is they are overcrowded, under-resourced and the government is failing the youth.

So, in 2008, Equal Education (EE) was formed with a view to putting education on the national agenda through mobilising young people.

They call themselves “Equalisers”. They are future leaders who are learning how to navigate recalcitrant government departments to claim their rights. They are also the EELC’s clients.

EELC director, Nurina Ally, says it was founded in 2012 out of a need identified by EE for legal support for the social movement.

“We  support EE’s campaigns and collaborate in developing strategies, advocacy and action to bring about sustained change, not only at the point of litigation, which is primarily undertaken after exhaustion of other avenues of engagement.”

Ally says the model is one of “movement lawyering” - its role is to both expand and defend the space within which the social movement operates.

“This includes strategic litigation that addresses: obstacles to access, information, the ability to organise protests, and the delivery of basic education needs, to name a few.

“It also involves lawyers providing on the ground assistance and support when needed.”

She says it’s a unique and effective toolkit for the social movement, which also includes understanding existing legal frameworks and working towards advancing these frameworks  to enhance spaces for public engagement, deliberation and accountability.

The  EELC’s “movement lawyering” work has had many significant legal wins over the years including ensuring that government’s law on school infrastructure for all South African schools (which Equalisers got government to adopt through dogged protest action and media advocacy) is clear and properly binding on government.

It has also made significant strides in support of EE’s  “#LongWalkToSchool” campaign - the hashtag being a reference to Nelson Mandela’s own “Long Walk to Freedom” - spurred on by the failure of the education department to provide school transport for Equalisers and learners in rural Nqutu in northern KwaZulu-Natal who were walking long, exhausting and often dangerous routes to get to school and back.

Last year, it achieved a “momentous victory”, when a settlement agreement was made an order of court, resulting in more than 3000 learners receiving transport and the department being placed on terms to, among others, finalise a scholar transport policy.

The centre, with EE, returned to court last month and secured another court order - “a victory for accountability” - that the department must release its draft scholar transport policy for public comment by January 30 next year, failing which the head of department would have to do some explaining to the court and to EE.

“These are hard-won victories by Equalisers over many years. Campaigns like these demonstrate the impact that the powerful combination of activist lawyering and sustained movement-building has in the struggle for social justice”.