Kenneth Okwor from Templars Law Firm is a mentor to aspirant young lawyers across Nigeria. This remarkable ability to inspire others while grappling with the legalities of high finance has marked him as one to watch. He spoke to Ugochukwu Kingsley Ani. 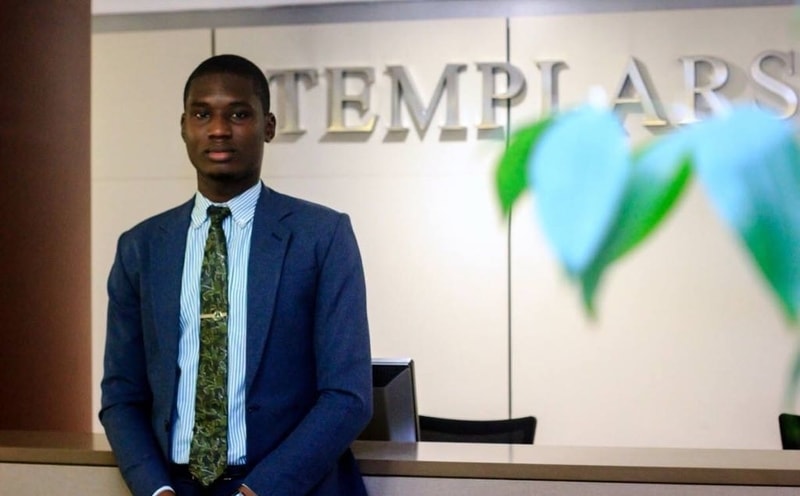 Entering the legal profession was far more than a career choice for Kenneth Ononeze Dominic Okwor, it was a calling.

He is currently a corporate and financial law associate for Templars in Lagos and an adjunct lecturer at the Lagos campus of the Nigerian Law School where he is a mentor to hundreds of aspirant young lawyers.

One of his students, Graham Garrick, who was SRC president, described his lecturer on a social media platform as “an inspiration”.

“Kenneth was an adjunct lecturer but he did a lot of work on our mind and brains. I remember walking up to him for the first time to explain how afraid I was of corporate law and the words he spoke to me changed me from that day,” wrote Garrick.

More recently Okwor has been a student at Harvard Law School where he has recently completed his Master of Law – his research focus being derivatives, specifically market and regulatory structure.

To say Okwor was born to law would be an understatement. He grew up the eldest of five children in Jos, a city in central Nigeria known for its tin mines. He learned the ins and outs of the profession from his father, Jones C. Okwor, also a lawyer, while his mother, Dr Irene Nkasiobi Okwor, instilled Christian values within him.

“I was driven by a burning desire to be excellent at solving legal problems,” he chuckles, thinking back.

Now his world is very much commercial law. At Templars he advises on deals and regulatory compliance but is available for any litigation arising from this.

“Knowing what the law says is really not enough. I have to know where the market is, I have to know the trends, and understand established market practices. It is really about finding innovative and efficient ways to advance our clients’ commercial interests while keeping them within the reasonable bounds of the law.”

Though Okwor focuses on corporate and financial law, he says most corporate lawyers typically go full circle. “We have to be fairly competent in a lot of areas because a client’s instructions may touch on several areas of law.”

Speaking more generally, he says, the biggest issues facing the profession in Nigeria include the poor standards of legal education and poor guidance given to young lawyers as they step into the profession. He believes that these are existential problems for the profession especially in the face of the disruptive effects of the fourth industrial revolution.

“We are also seeing a convergence between law and other disciplines, this means that progressive-thinking lawyers have to expand their knowledge and merge it with other disciplines like finance, policy development, biotech, and financial technology. Any lawyer who can do this, and offer a nuanced service, would certainly be in demand.

Lawyers in Nigeria – as they are across Africa – have a big part to play in their countries’ development, he says.

“And by this I mean we have to deepen our understanding of the application and enforcement of constitutional and administrative law.”

The private sector has a big part to play too and, with democracy now entrenched, he says businesses are increasingly able to play a bigger role in strengthening the economy.

“A strong business sector can contribute so much to the economy by providing employment opportunities, increasing the income tax base and attracting foreign investment,” he says.

And despite challenges, he says, businesses are thriving because of their unique models and the resilient attitudes of the people behind them.

“They could be more altruistic though,” he says, “especially given the negative social and environmental impact some industrial activities have on host communities within the country.”

The Nigerian government too is making strides but he says there are sectors that need more work. “These are internal security, power, and manufacturing, which are all critical areas. There needs to be far more diversification of the productive base of the economy. There is so much potential in Nigeria – the economy can be much bigger and we can do much better.”

His personal growth and success, which includes coming top of his class at law school, he credits to hard work and strong mentorship. Without these guiding hands, he says, he would not be where he is today.

Despite his success, those who know Okwor say it is his humility coupled with his staggering intelligence that sets him apart. Matthias Zechariah, one of his teachers from the University of Jos, wrote of him: “Kenneth is a rare asset to be coveted by everyone and by every organization.” It is Templars who has him though and, of course, his students!

The writer of this article, Ugochukwu Kingsley Ani, is Lagos-based and trained in law. Re-publication of this article is authorised only in the following circumstances; the writer and Africa Legal are both recognised as the author and the website address www.africa-legal.com must be included.