Greta Thunberg, along with 16 other children have filed a landmark complaint on “depraved indifference” to climate crisis with the UN Committee on the Rights of the Child. Tony Carnie reports 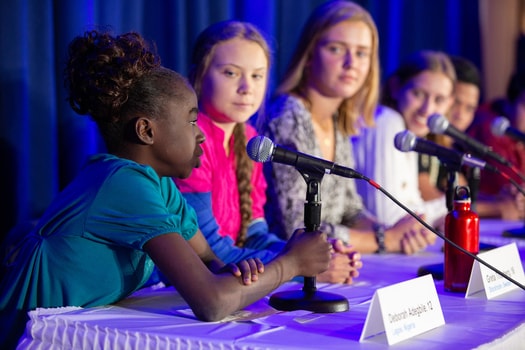 Debby Morayo Adegbile, 12, from Lagos, (seated next to global climate activist Greta Thunberg) speaks at a press conference at UNICEF House in New York, on September 23, 2019, to announce collective legal action being taken on behalf of young people facing the impacts of the climate crisis. Picture credit: Radhika Chalasani/UNICEF

Attorneys representing 16 children across the world have lodged a landmark complaint with a United Nations human rights committee, protesting against the lack of effective action by world governments to avert the life-threatening global climate crisis.

The children – who include Swedish climate activist Greta Thunberg and three children from Nigeria, South Africa and Tunisia – are represented by the global legal firm Hausfeld LLP of London and USA.

The novel legal complaint has been lodged in terms of the Convention on the Rights of the Child (CRC), an international human rights treaty focused on the universal rights of children

Complaints filed under the CRC’s Third Optional Protocol are adjudicated upon by the Committee on the Rights of the Child, a group of independent experts.

The Committee is able to receive complaints from children or groups of children against any State that has ratified the Protocol. The Committee is also able to launch investigations into “grave or systematic violations”.

Hausfeld LLP has compiled just over 100 pages of argument, including case law dating back to 6th century Roman law doctrine Corpus Juris Civilis along with other more recent cases such as the European Court of Human Rights case Andreou v. Turkey, where Turkish forces shot a Cypriot national on territory beyond Turkey’s control.

Thunberg and her fellow climate activists argue that it is too expensive and impractical to lodge domestic legal action in their home nations.

In the opening remarks, the children argue that the science supporting their complaint is  incontrovertible: namely that global warming is caused by human activities that emit millions of tons of carbon dioxide (CO2) and other greenhouse gases into the atmosphere each day – and that there is now more CO2 in the atmosphere than at any time in the past 800,000 years.

“The Earth is 1.1°C hotter than before the industrial revolution, and it is approaching a tipping point of foreseeable and irreversible catastrophic effects. If the Earth reaches 2°C of heating, the exacerbated air pollution alone is forecast to cause 150 million deaths.

“If the Earth reaches 3-4°C of heating by 2100—which is the current trajectory if states do not make drastic emissions reductions—the impacts of climate change will threaten the lives and welfare of over 2 billion children.”

They argue that the climate crisis is no longer an “abstract future threat” and that the current rise in global average temperature is already causing devastating heat waves, forest fires, extreme weather patterns, floods, and sea level rise and infringing on the human rights of millions of people globally.

“Because children are among the most vulnerable to these life-threatening impacts, physiologically and mentally, they will bear the burden of these harms far more and far longer than adults.”

The complaint, announced at a press conference at UNICEF Headquarters in New York on September 23, aims to inspire the urgent action needed to curb global heating and mitigate the impact of the climate crisis.

With the support of UNICEF they have urged the independent body to order Member States to take action to protect children from the devastating impacts of climate change.