Backlogs in testing crime scene exhibits at forensic labs in South Africa are said to run into the hundreds of thousands - and criminals, especially rapists are benefitting from this writes Tania Broughton. 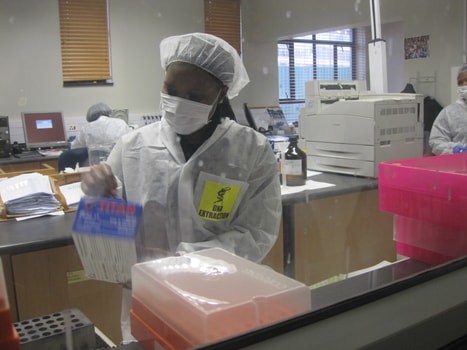 In a recent matter, where a man was accused of the brutal rape and murder of a young woman, the judge presiding over the trial was able to convict because of eye-witness accounts and physical evidence of her belongings being found at his home.

But many similar matters rely heavily on DNA sampling.

Durban High Court Acting Judge Anand Maharaj was all too aware of this when he penned his judgment finding Yaseen Khan guilty of raping and beating Zamacenge Mngoma to death in April 2019.

“It would be remiss of me to shut my eyes and not say anything,” he said, of evidence given by the investigating officer during the trial.

In essence, the policeman said the lack of forensic evidence in the case was because of the huge backlogs at the labs. Samples of blood found spattered on the walls, and semen found in condoms had been sent off, but no results had been sent back.

The situation was dire, he told the court. His cluster - comprising 42 police stations - had been allocated two dates for submission of all exhibits. One at the end of this month and one in April next year.

And then, they had to pick and choose which ones to send on those dates, because they were only allowed a maximum of five.

“This is nothing short of a damning indictment of those individuals responsible for ensuring that there are sufficient laboratories and qualified personnel to ensure timeous and expeditious finalisation of these reports,” the judge said.

“Surely the backlogs are indicative that there are systematic problems being experienced in these laboratories,” Judge Maharaj said, suggesting the powers-that-be consider amending legislation to allow for universities or the private sector to assist.

“It is a travesty of justice,” he said.

Commenting on recent newspaper reports detailing the crisis - which reflect backlogs of between 100 000 and 125 000 exhibits - the judge said it had been suggested that the backlogs stemmed from a maintenance contract for highly sensitive machinery not being renewed because funding had been withdrawn.

If this was so, Judge Maharaj said, those responsible had failed in their constitutional obligations.

Quoted in a local newspaper, the former deputy chair of the National Forensic Oversight and Ethics Board, Vanessa Lynch, said there had been a 300% increase in the backlog of cases since April this year - close to 125 000.

“In short, our most powerful weapon against gender-based violence is not being deployed because the funding originally promised to the DNA unit, when the DNA Act was passed in 2015, was withdrawn in the 2018/ 2019 financial year,” she was quoted as saying.

Police minister Bheki Cele has not yet commented on the issue.