Justice Kate O’Regan has given her name and support to the University of Cape Town’s Intervarsity Moot Competition. With student, Navi Raju, she spoke to Gillian Mitchell about how mooting develops courtroom experience. 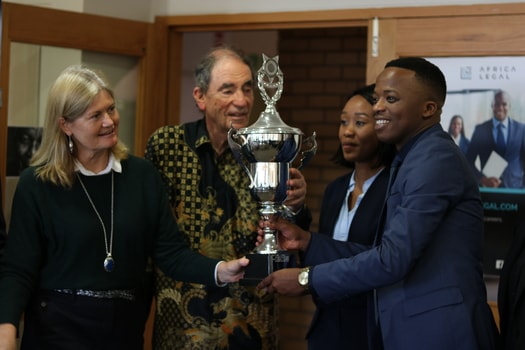 For the third year, the University of Cape Town (UCT) hosted its intervarsity moot competition in August bringing together 20 students from across South Africa to wrestle with a hypothetical legal scenario.

This year the topic was on Intellectual Property law and the winners, for the second consecutive time, was the team from the University of Fort Hare in the Eastern Cape.

In a recorded interview afterwards Justice O’Regan, who sat on the bench of the Constitutional Court from 1994 to 2009, and who is now the inaugural director of the Bonavero Institute of Human Rights at the University of Oxford, said she was honoured but “somewhat uncomfortable” at being able to give her name to the event. Her discomfort, she explained, was that so many great legal minds had come out of UCT and South Africa.

Justice O’Regan judged the semi-final and the final - looking, she explained, for a student’s ability to apply the law to facts, and ability to move across different areas of the law.

“A lot of what we teach is about what the content of law is – but when you get to a set of facts it is often a lot messier than what you present in the classroom. There are lots of little extraneous details that may or may not be relevant – so you have to recognise what law has to be applied and, very often, it might be different areas of the law.

“(In moot court) it is not pure debating, it’s not so much how articulate and glossy you sound, it is about whether you can respond to questions and put together arguments on your feet that you haven’t thought through before.”

The difference between mooting and debating also lay in the questioning from judges on the moot bench – here students had to apply ordinary but proper legal skills when answering.

Navi Raju, one of the student organisers of the event, explained that mooting was about presenting a problem to someone with whom you are having a conversation.

“When you engage with judges, you are not fighting with them. It is you and the judge working on the problem together…You are having a conversation with a judge about how you can improve a situation legally.”

What students realised (through mooting) was that these conversations – with someone as experienced as a judge - had repercussions for society.

Justice O’ Regan said the opportunity for students to come together from different parts of the country was valuable.

“It is great to see the energy and time that students put in, because, at the end of the day, I think being a good lawyer is about hard work and putting time in.”

Raju said that the diversity of the competition was critical as this exposed lawyers to what they would face in the country’s courts.

“The greatest experience we can have as students is not to only learn from our teachers, but also from our peers who think differently.” She quoted Justice Albie Sachs who had said in his speech that a peer could say something that could change another’s whole perspective. Diversity exposed one to challenges and, she said, “We can only grow when we are challenged…We can challenge ourselves by expanding our boundaries.”

Africa Legal is a sponsor of the annual UCT Kate O’Regan Intervarsity Moot Court competition. The hope is to grow the event to eventually include teams from across Africa.