In the third of a six-part series showcasing champions of the rule of law in Africa, Karim Anjarwalla of ALN talks to Craig Sisterson. 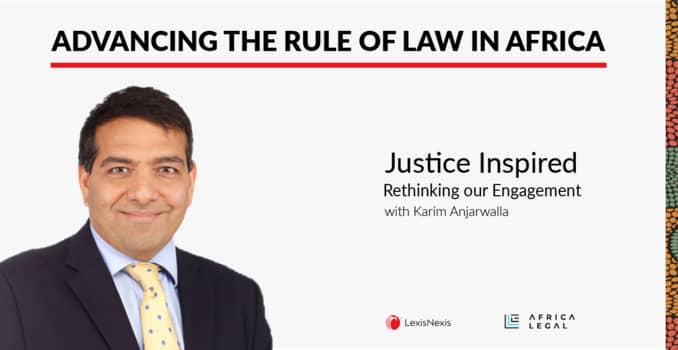 Corporate lawyers should not let any views about being apolitical prevent them from actively engaging in rule of law issues, because defending the rule of law is itself apolitical, says leading corporate M&A practitioner and cross-border expert Karim Anjarwalla.

"For many years, the corporate part of our profession took the view that we'd leave the rule of law fight to human rights defenders and activists – that our job was to be apolitical," added the Managing Partner of ALN Kenya | Anjarwalla & Khanna. “But that whole issue is structured the wrong way, because I don’t think defending the rule of law is political in the first place.”

While politicians may try to politicise things, the idea that the rule of law is a good thing is something on which everyone of all political nuances should agree, he commented.

"What the legal profession can do as a whole, particularly those of us in corporate law, is to rethink our engagement with the rule of law, because we have heft, and the ability to shape and influence opinion. We also have resources, frankly, which many less financially endowed but well-meaning defenders of the rule of law don't have. It's incumbent on us to use those resources – the know-how, the global networks we have – to force the government to behave better."

For Anjarwalla, who’s been practising corporate law in Kenya for 25 years, the rule of law is “super important” not only because of issues of fairness and justice, but also because there’s a causal link between peace, security, economic and social progress and the rule of law.

Anjarwalla has been inspired by a variety of lawyers and activists who've fought for a range of important issues in relative obscurity. “There are just so many human rights defenders across Africa who neither court nor receive attention,” he said.

It is the everyday person who wakes up each morning and fights against female genital mutilation for young and insecure girls, or the person who combats climate change in their daily efforts, or the civilian who opts to give civic education to those in need – the unsung heroes in everyday life – who inspire Anjarwalla and his efforts to uphold and strengthen the rule of law.

The ALN Academy plays a critical role in supporting the rule of law through training and capacity-building across Africa, and also operates an extensive but focused pro bono programme. As Anjarwalla noted, “The amount of good pro bono work you can do is endless, so we chose to focus around specific themes, such as the environment.”

One example is ALN working closely with The Flipflopi, an organisation that has built a first-of-its-kind sailing boat entirely out of recycled flip flops found on beaches, as a symbol in the fight against single-use plastics and their harm to waterways and livelihoods.