Is the Rule of Law in jeopardy?

There is still time to take part in the ground-breaking ‘African Rule of Law Survey 2021’ launched as part of the partnership between LexisNexis and Africa Legal. 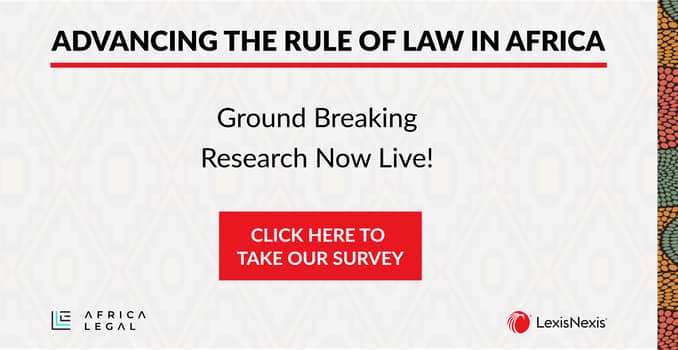 With more than 300 respondents from 16 African countries, the data is already shining a fascinating light on the perceived status of the Rule of Law in Africa.

A majority of the respondents (61%) believe the Rule of Law will either stagnate or decline in their home jurisdiction across the next five years.

The need for robust and rapid action in addressing key justice issues is even more profound when considering that a concerning 71% of respondents think that the provision of justice in their country is either “unequal” or “very unequal” with only 7% judging justice as truly ‘equal’.

As to who needs to be the driving force behind such change, our data is very clear in highlighting national governments and judiciaries as those viewed by our community as most responsible.

As to the causes behind the stalling or decline in justice equality and the Rule of Law, government inefficiency and corruption are flagged as the most significant contributors.

The survey component of this partnership is due to close at the end of August 2021 where we will then transition the findings and supplementary insights and content into the first-ever ‘African Rule of Law Report’. To supplement this report we will also be exploring the inspirations behind some of Africa’s most prolific justice crusaders through published interviews under our ‘Justice Inspired’ content series.