Key players in a $380 million international hospital project in Uganda are embroiled in a legal war. Tania Broughton reports. 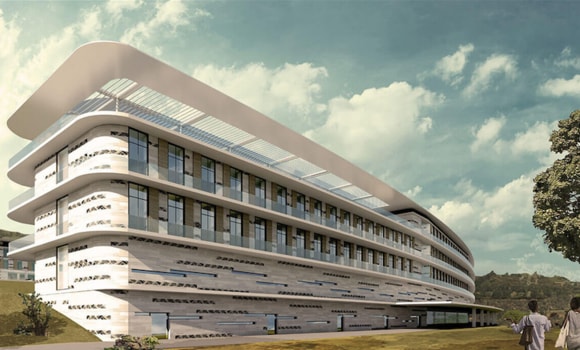 The sod turning ceremony at the site in Lubowa was officiated by President Yoweri Museveni himself - a sign of how important the hospital is not only to Uganda but to those living in Sub-Saharan Africa requiring specialised services for cancer, heart disease, neurosurgery and kidney transplants.

The financing was in place, the plans drawn up and the site prepared.

But, on the day construction was to begin last month, men wearing military gear, police officers and unknown Chinese men barged on to site and demanded that those employed by the main contractor, Roko Construction, leave.

So, the company went to court.

The construction company has had a presence in Uganda since 1969 and has been responsible for many high profile buildings including the Uganda Catholic Martyrs Shrine.

With bank funding in place, and government approval, Roko moved on to site and cleared, hoarded and drained the land and put in electricity, water and security.

But at the last minute Finasi wanted to renege on the deal.

In his application for an injunction Koehler said: “We will be seriously prejudiced by this. We will be alienated from the agreement, will suffer huge financial losses and be in heavy default to the  government.”

The attempt to evict the company, at the instigation of Finasi chairperson Enrica Pinetti, had come as a “shock and a surprise”.

“This could result in calamitous repercussions to the entire project. We have spent colossal sums of money and man hours to design and plan for construction,” he said.

The Joint Venture and Finasi opposed the application.

They claimed that Roko did not have legal possession of the site, that it only had a nominal (5%) shareholding, and it had never assisted with securing finance.

“The project has already suffered a delay of over six months and we are under an obligation to deliver a finished hospital to the government within 22 months,” they argued.

The judge ruled in favour of Roko.

“The company has shown that it is able to perform on the project, whilst Finasi has not. There is no telling how it would construct a $379 million dollar hospital it if does not have Roko as a contractor.”

He ruled that Roko had been involved in mobilising funding and it was “in bad faith that (the respondents) now wanted to kick Roko off the contract at the very last moment.”

Judge Bashaija said if he did not issue the “positive” injunction to ensure the project went ahead, the government and people of Uganda could be left holding an “empty bag”.

The injunction - which will still have to made final - prevents Finasi from evicting Roko, interfering with the execution of the contract and engaging another contractor.