By 2050 Africa will be home to a quarter of the world’s population. As that day approaches, the continent is transforming its fortunes by means of trade and investment. UK Prime Minister Boris Johnson wants Britain to be there every step of the journey, reports Annie Dorasamy. 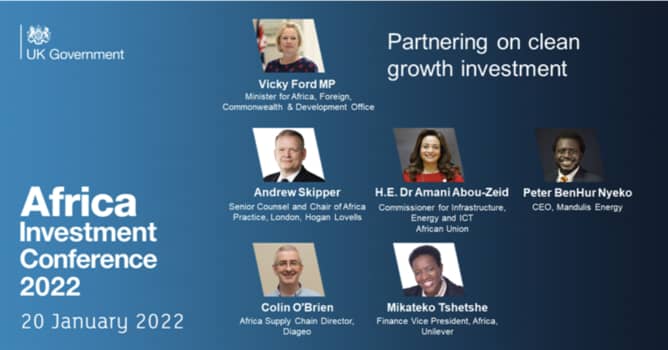 Johnson made the remarks at the opening of the second Africa Investment Conference, held virtually on 20 January, which aimed to enhance the UK’s role as the continent’s investment partner of choice for greener, climate-friendly projects.

“We are already one of Africa’s biggest commercial partners, Johnson stated. “We have signed nine free trade agreements with our African friends and, in this financial year alone, our embassies and High Commissions helped the British government to invest £2.5 billion in Africa.”  Further ties are evidenced by the Memorandum of Understanding signed by the UK Department of International Trade with the Secretariat of the African Continental Free Trade Area (AfCTA) – a first of its kind agreement with a country outside Africa.

At the same time, Dr Vera Songwe, United Nations Under-Secretary-General and Executive Secretary of the Economic Commission for Africa has challenged the UK to increase its foreign direct investment from three percent which has not increased since 2009. She highlighted that many African countries have improved on the regulatory environment and put in place systems, policies and mechanisms to implement better, more transparent and more efficient processes.

Andrew Skipper, Chair of the Africa Practice at Hogan Lovells, facilitated a dynamic cross-sectoral panel discussion at the conference on why clean growth investment is a key aspect of future development across Africa. The panelists highlighted some many projects in this arena that are being done on the continent.

Dr Amani Abou-Zeid, African Union (AU) Commissioner in charge of Infrastructure, Energy and ICT, was first up. She explained that under the AU they have developed a program with projects that have been screened and selected to be climate resilient, just and equitable, and have smart technologies to bridge urban and rural gaps.

“We provide facilities to help with the preparation in the early stages of any project in infrastructure,” she said. “We are working to harmonise the policies and the regulations in order to make it easier for investors to work in two or three countries at the same time in these regional or transcontinental projects.”

Peter BenHur Nyeko, CEO of Mandulis Energy, a cleantech start-up and social enterprise focused on developing and deploying new technologies, weighed in on the energy transition. He said their ability to power rural industries at the same price that urban industries were powered, encouraged urban industries to move closer to the source of production.

“That makes a massive difference. In those communities we have already introduced electric mobility, electric transportation, electric ambulances, making the transition even more interesting,” he explained.

Colin O’ Brien, Africa Supply Chain Director at Diageo Africa, spoke of how his company was decarbonising the supply chain process by going from using 47% locally sourced raw materials to 80% for the making of beer and spirits

This target was achieved by investing in the capabilities within their local breweries to be able to handle locally sourced raw materials, and equally investing in the agriculture supply chain and the farmers to develop the local supply chain. He listed Ghana and Kenya, where they have recently opened breweries, as among his company’s success stories.

For Mikateko Tshetshe, Finance Vice President Unilever Africa, the company’s priority is having a strong manufacturing footprint. She told delegates over 90% of the goods they sell in Africa are made in Africa, and the free trade agreement played a big role in their ability to make their brands affordable.

“The investment we need from the community on this platform is investing in road, rail and air transport and providing best practice and knowledge to help ensure an effective market integrated for trade,” she concluded.