The International Court of Justice (ICJ) has delivered a ruling on the lingering maritime border dispute between Somalia and Kenya. Alfred Olufemi asks whether this ends the eight-year legal row between the two East African nations. 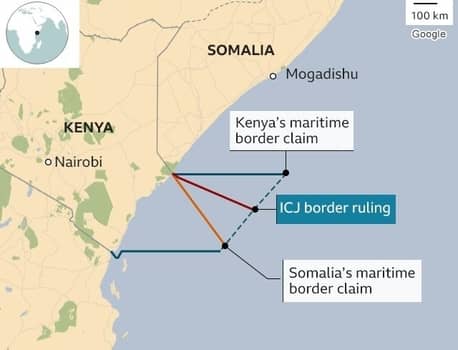 In 2014 the Republic of Somalia dragged Kenya’s government to the UN court, headquartered in The Hague, over a disputed area which covers a triangle about 100 000km2 in extent in the Indian Ocean. The region is believed to be rich in oil and gas, hence the tussle for control of it.

Since the 14-man judicial panel at the international court agreed that there was no existing maritime border between the two countries, it rejected the boundary Kenya proposed. The court, instead, drew a new border closer to the one claimed by Somalia, effectively splitting the disputed area in half.

Although widely celebrated across Somalia, the ruling cannot be enforced by the international court, raising concerns about the effectiveness of the legal channel in solving rancorous disputes among member-states.

Notwithstanding this, shortly after the court gave its verdict, the Somali Prime Minister Mohamed Hussein Roble congratulated his countrymen on the victory. In a celebratory message, Somali Information Minister, Osman Dubbe, added that the country’s success at the ICJ did not come easily, but “through struggle and sacrifice”.

The Kenyan government has, however, rejected the court’s verdict. In a statement, Kenyan President Uhuru Kenyatta said he was not surprised at the decision, but was “profoundly concerned by the import of the decision and its implications for the Horn of Africa region, and international law generally. At the outset, Kenya wishes to indicate that it rejects in totality and does not recognize the findings in the decision.”

According to Kenyatta, the decision raises questions about the ICJ’s jurisdiction on the matter and “raises a fundamental question on the respect of the sovereignty and consent of states to international judicial processes”. Kenyatta reiterated that the international tribunals have jurisdiction “only to the extent of consent by a state”.

The Kenyan president also alleged that the panel of judges did not permit the use of regional dispute resolution mechanisms, let alone their exhaustion. “Even with these flaws, Kenya participated in the initial proceedings out of its traditional respect for the rule of law, if only to make its case that the Court had neither jurisdiction nor competence over the dispute,” he insisted.

Without stating explicitly his next line of action, the Kenyan president assured the citizens of his country of his commitment to resolve the issue amicably.

The judgement clearly did not lay to rest the dispute between the two countries, but on Twitter Shehu Sani, a former Nigerian lawmaker, beseeched the parties involved “that the ruling of the Court must NOT destroy our [Africa’s] brotherhood and good neighbourliness”.