Bowmans’ Chair and Senior Partner, Rob Legh, who died of Covid-19 related complications on July 1, has been praised by the business community for his input into the establishment of the South African Government’s Temporary Employment Relief Scheme (Ters). Tania Broughton reports. 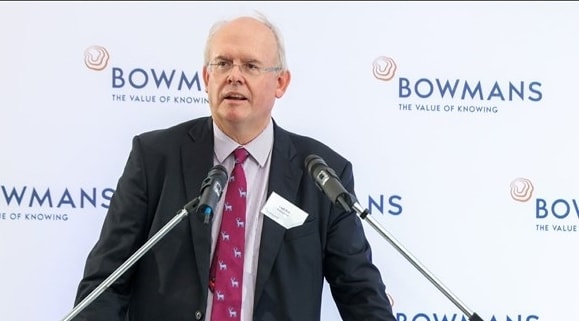 At the height of last year’s stringent lockdowns, Ters is said to have channeled some R58 billion (£2.9b) into 267 000 businesses, propping up salaries and wages for more than five million employees, whose pay had either stopped completely or had been slashed between April 2020 and March 2021.

Legh, as a member of Business for SA (B4SA) - set up to help mitigate the effects of the pandemic -  played a leading role in fine-tuning the Ters scheme.

As head of Bowmans he extended its reach into Africa, putting it on a firm footing as a leading law firm on the continent.

He was also an expert on antitrust and regulatory law, and mergers and acquisitions.

According to media reports he worked on several high-profile cases involving hostile mergers and the dominance of cartels and contributed to a South African textbook on competition law.

Legh, 59, died after spending two months in hospital fighting the virus. He joined Bowmans as a candidate attorney in 1986, became partner in 1992, and was chair for seven years.

In an interview with Business Day, B4SA steering committee chair Martin Kingston said his death was a huge loss to the country and business community.

“He was a profoundly competent and insightful lawyer with very diverse experience,” Kingston said.

He was also a keen strategist, a thoughtful and principled advisor, he had a wry sense of humour and was a gracious winner and “good loser” when he played his favourite game, golf.

Patel said Legh had been instrumental in developing competition law in South Africa and had advised the ministry on a pro bono basis on industry matters.

Bowman’s deputy chair Ezra Davids, said one of Legh’s greatest achievements was to drive the strategy to consolidate the firm's position as a leading pan-African law firm.

Friend and colleague Christo Els, who chairs Webber Wentzel, in a message to senior staff at his own firm, said, “Rob made a significant contribution to the legal profession and his life has had a direct influence on so many of us. While Rob’s work is now done, it will never be forgotten.”