The Duke and Duchess of Sussex’s tour to southern Africa ends today (Wednesday October 2) and, in true Princess Diana style, they have left plenty of goodwill and a renewed energy to the royal’s relationship with Africa. 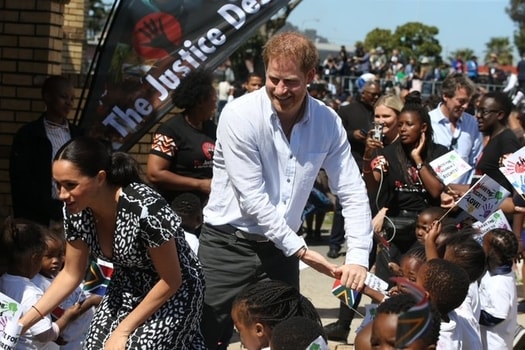 Meghan, Harry and their five-month-old son, Archie, visited South Africa after which Harry continued on alone to Botswana, Angola and Malawi.

Britain’s Telegraph newspaper reported that Harry wanted to continue the work of his mother, especially in Angola, where Diana was instrumental in turning global attention to the deadly legacy of landmines. Diana’s work to end discrimination against people living with HIV and Aids, also focussed Harry’s efforts.

“The Duke of Sussex’s love for Africa is well known; he first visited the continent at the age of thirteen and, more than two decades later, the people, culture, wildlife and resilient communities continue to inspire and motivate him every day,” a spokesperson for the couple was quoted in the Telegraph.

The couple’s first engagement was in Nyanga in Cape Town. The area is dangerous, with crime statistics showing it to be among the worst areas for  violent crime in South Africa. Here they visited the Justice Desk, a programme run by Queen’s Young Leader, Jessica Dewhurst, and supported by The Queen’s Commonwealth Trust (QCT). The initiative teaches children about their rights, self-awareness and safety, and provides self-defence classes and female empowerment training to girls.

While in Cape Town the couple met anti-apartheid leader, Archbishop Emeritus Desmond Tutu, and his wife, Leah, at the the Desmond & Leah Tutu Legacy Foundation. This was also Archie’s first public appearance on the tour. In his basket of gifts Archbishop Tutu included a pair of framed photographs of Princess Diana meeting Nelson Mandela in 1997. One for Harry and the other for Prince William.

Among the more moving moments of the tour was when Meghan stopped to hug Anglican priest Father Michael Lapsley while visiting the Auwal Mosque in Cape Town’s Bo Kaap. Father Lapsley lost both his hands and the sight of one eye when he opened a letter bomb sent to him by apartheid security agents. Despite what happened to him Father Lapsley has worked tirelessly to help survivors of trauma and torture around the world.

“Shaking hands is obviously not natural for me. So I went to hug her,” he told The Times newspaper afterwards.