Naomi Kasi Mue, named Junior Corporate Counsel of the Year at the African Legal Awards in September, speaks to Carol Campbell about her life and work. 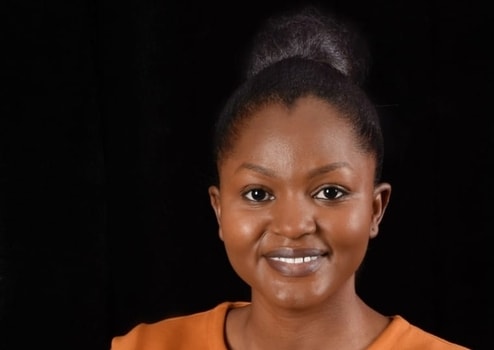 Naomi, who is the Group Legal Counsel for the Adrian Group in Kenya, says the award, presented at the gala event in Johannesburg, was unexpected even though she had been a runner up the year before.

For the 29-year-old advocate, one of seven children, the achievement is the culmination of years of disciplined study. This ability to put her head down and focus was ingrained in her by her entrepreneurial parents, Mr Mue Masila and Mrs Anne Mue.

Among her first memories of life, Naomi remembers being taught the value of education and that, to achieve anything and do well, required effort. Just passing was not enough for her dad, he wanted her to be the best.

“Among my siblings, I am the average one,” she laughs.

Law was the profession Naomi chose “to make my dad proud”.

“It was either that or an air-hostess,” she laughs.

Mr Mue, who still runs his textbook and stationery distribution business in Mwingi, (a small town 200 kms east of Nairobi), was satisfied with her decision and, she says he confessed that having a daughter who was a lawyer would be good for the family business.

In the school holidays the brothers and sisters all worked for their father.

“It meant we understood the principles of how a business worked from a very young age and what it took to make an operation viable and successful,” she says.

Making her dad proud remains Naomi’s driving force. Throughout the evening of the African Legal awards, her mom texted her to find out what was happening and was overwhelmed when her daughter won.

Her father, she says, was “the most strict” parent anybody could imagine and he never let on to his children when he was pleased with them. “But I know this award put a smile on his face.”

The young lawyer attended Nzeluni Girls’ High School in Kitui County as a boarder. The routine and academic focus enabled her to do well and, when she finished school, she had options.

She took a gap year to master computers and fill in the gaps in her knowledge of different software programs before taking a place at Moi University’s School of Law in Eldoret.

She completed her legal training through the Kenya School of Law in Nairobi with a diploma in law through the advocates’ training programme. Recently she qualified as a certified professional mediator through the Mediation Training Institute.

“For a time I thought my career would be in litigation but, after taking the Bar exam and becoming an in-house lawyer, my interest shifted to corporate, commercial, intellectual property and conveyancing law,” she says.

The need in Kenya, she soon realized, was for lawyers with an understanding of the regulations around the burgeoning telecommunications and power infrastructure developments.  There were complex regulatory compliance issues for developers as well as tax laws.

Naomi joined the Adrian Group as the in-house legal counsel in 2015. The company specializes in construction, managed services, power, telecommunications and IT. Her role is to ensure regulatory compliance, provide an internal advisory on legal issues and management of company assets. She also deals with court matters and researches issues related to the business and its expansion. Contracts, compliance and negotiations dominate her day-to-day life.

“There are opportunities for development across Kenya. And, while the government is making regulatory compliance less bureaucratic, there are hurdles that need an informed legal eye,” she says. “As Adrian Kenya is focused on power and telecommunications infrastructure development, it is essential there is buy in from local communities and that, for the sustainability of these projects, correct protocols must be followed to the letter,” she says.

Naomi spends a great deal of time reviewing government policy changes and directives and assessing the legal implications for the group. Based on this, she writes legal opinions and progress reports to inform pending decisions on corporate development and growth. Sometimes, this means appearing in court but, she says, most of the time it involves on the ground negotiation and then drafting and reviewing contracts.

With procurement a big part of the groups’ function, she monitors discussions and decisions to manage due diligence.  And, as the group expands, property management has become a growing function.

To unwind during the week she enjoys swimming at the gym or joining a Zumba (dance-exercise) class. Her reading material is mostly for work but she does dip into motivational books and confesses a secret enjoyment of romantic novels. She loves socializing and, while she is soft spoken, is talkative with friends. On Sundays she goes to church.

“My passion for law has given me the opportunity to work in a dynamic and interesting profession, for a great company in a country that is becoming a major player on the continent. I love being part of this change.”