A “Just Energy Transition” is likely to remain a buzz phrase for the next couple of years as Africa, and the rest of the world, works towards shifting from fossil-based fuels to zero carbon by 2050. In this videocast, part of Africa Legal’s Energy Sector Insight series, an esteemed panel of experts, hosted by Webber Wentzel’s Jason van der Poel, shares insights on Africa’s energy sector ahead of COP26. 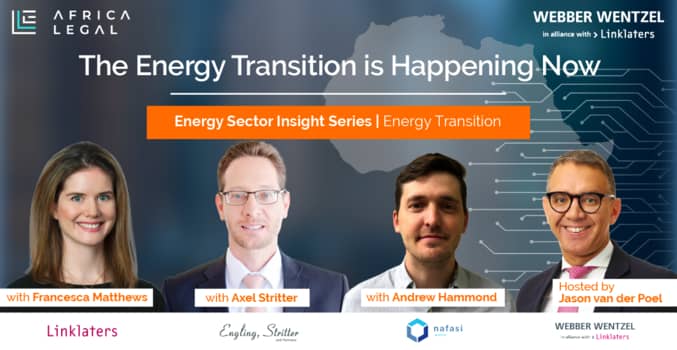 How is transitioning from hydrocarbons to green solutions going to be possible? What sort of legal considerations need to be made? Is it possible for African countries to shift from importing energy to exporting energy by adopting sustainable outputs? Can we create stronger economies without breaking laws and destroying the planet? These are some of the pertinent questions Jason van der Poel, partner and head of the Energy Sector Group at Webber Wentzel, discusses with the experts.

Van der Poel’s guests are Axel Stritter (partner and corporate law, energy and mining expert at Engling, Stritter and Partners in Namibia), Andrew Hammond (senior process engineer at Nafasi Water) and Francesca Matthews (an energy and infrastructure partner at Linklaters based in London).

The panel exchanges views on the feasibility and reality of sustainable energy on the continent. It seems that governments, businesses and other relevant stakeholders are indeed pushing towards clean energy resources to abide by the Paris Agreement and ensure net zero carbon dioxide emissions by 2050.

“Is it possible for African countries to shift from importing to exporting energy?” asks Van der Poel. The answer is yes.

Stritter says the Namibian government is taking progressive steps of improving on its pledge of reducing emissions from 89% to 91% by 2030 to meet the Paris Agreement goal. At the moment a great deal of Namibia’s energy source is imported. Stritter believes the energy transition would give the country “a good opportunity to actually realise the renewable energy opportunities”. Discussions are also underway with the Netherlands and Germany to see how hydrogen can be exported from Namibia.

“Is there a disconnect between local government initiatives, international obligations, private sector engagement and shareholder expectations in this sphere?” asks Van der Poel.

Matthews says there has been a change in the urgency with which the global climate change crisis is viewed. “There has been a shift from asking how we reduce emissions to asking how we get to net zero within defined time scales. And that shift has come from a variety of sources. It's been led by scientists, non-governmental organisations and by citizens, and increasingly governments and regulators are responding with policy levers. Certainly, in Europe we are seeing a distinct narrowing of that disconnect. There has been a slew of policy announcements in Europe and the UK which are aimed at defining and compelling the steps needed to get to net zero, particularly as we get closer to COP26 in Glasgow.”

Webber Wentzel has an insights series focusing on what the conference means for South Africa and Africa, and specifically on  businesses operating in Africa. To view the series, click here.

You can watch the full videocast here or on YouTube here