Choose a Seat in Africa

Commercial litigation and arbitration expert Sarah McKenzie talked to Craig Sisterson about evolutions in dispute resolution for the energy sector. 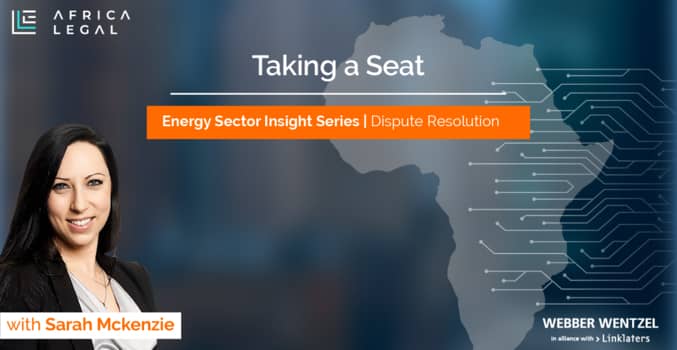 Parties to energy projects in Africa should give serious consideration to choosing a venue and seat of arbitration within the continent rather than relying on historically popular arbitral seats in the northern hemisphere, said Webber Wentzel partner Sarah McKenzie.

“In Africa there are a number of very strong arbitral seats where disputes can be safely resolved with support from the courts and without interference,” commented McKenzie, a commercial dispute resolution expert. “South Africa, for instance, recently adopted an International Arbitration Act in line with best practice globally, has a court system that’s very supportive of arbitration, and provides an excellent platform for arbitrations to take place.”

The energy sector – vital to the development of many African nations – has historically produced the highest value awards in international arbitration, noted McKenzie. Arbitration is becoming a stronger and better method for resolving disputes in general, for many reasons.

“There are lots of benefits to clients from using arbitration as their chosen dispute resolution method, including confidentiality of the proceedings, easy enforcement in cross-border disputes, and a flexible process tailored to the particular dispute.”

Covid has created a lot of disruption for the energy sector, noted McKenzie, with all projects that were underway when the pandemic hit affected in one way or another. The pandemic caused further strain on relationships among various players in the sector, with financiers concerned about insolvency risks, and the ability of sub-contractors as well as project companies to perform.

“I think the whole system was a little on edge over the last 18 or so months,” said McKenzie. “There’s also been an increased focus flowing from the pandemic on force majeure clauses – whether they’re in place, how they can be relied upon, and whether they cover these particular events. We’ve seen a number of disputes relating to force majeure rights and whether they apply to key energy sector projects. We’re likely to see more.”

During the pandemic there was also a move to virtual hearings for arbitrations, something that began out of necessity, but which McKenzie believes will continue in future.

“The global arbitration community has adapted quite well to virtual hearings,” she said. “It’s actually been a relatively good transition and we’re finding it can be a more efficient way to resolve disputes for clients, depending on the type of dispute and procedural requirements.”

While McKenzie expects some arbitrations will go back to physical hearings in future, particularly for bigger disputes or where there may be concerns around security of witness testimony, she believes that a large number of smaller hearings will continue to proceed virtually.

Whatever the case, McKenzie would like to see businesses involved with African energy projects, and other matters on the continent, look beyond traditional arbitral seats such as London, Paris and Singapore when drafting dispute resolution clauses in their contracts.

“I think it’s important in all sectors to think about whether there is an alternative African seat available that they could consider and potentially gain a lot of efficiencies from,” she said. “Parties should be able to take comfort in the strong track record that some African jurisdictions have in relation to arbitration.”