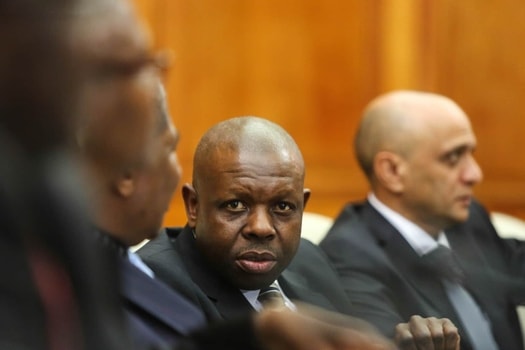 This follows the ruling by a Judicial Conduct Tribunal which unanimously found him guilty of gross misconduct for improperly attempting to influence two Constitutional Court judges to rule favourably in a matter involving then ANC President Jacob Zuma.

All eyes will now be on the Judicial Services Commission which will have to debate whether or not it agrees with the tribunal’s findings.

If it does, the matter will be referred to the National Assembly where, by two thirds majority, he can be removed from office.

It is unclear when the commission will sit to consider the matter: For the next four weeks it is tied up in interviewing judges for vacant positions. The interviews were stalled because of the Covid-19 pandemic.

But, in the meantime, there are growing calls for Hlophe’s suspension pending the final determination of his fate, especially in light of the fact that he has been in the job since the complaint was first made against him more than 12 years ago - and the delays in finalising the matter were mainly down to him.

In the words of the tribunal, Hlophe went on a “mission” in 2008, visiting Judge Bess Nkabinde and Judge Chris Jafta in their chambers.

At that time, the court had heard arguments in a matter crucial to Zuma, who was charged alongside French arms company Thint, on allegations of corruption relating to an arms deal.

In essence, Zuma and Thint were arguing that searches and the seizure of documents from them were unlawful and should not be able to be used against them in a future trial.

This was their last gasp: The Supreme Court of Appeal had already found against them.

The judges both reported how uncomfortable they felt when, with judgment pending, Hlophe raised the case with them.

“To each of the judges, he expressed strong views on the issue of privilege (of the seized documents). He said to Judge Jafta that the issue should be decided ‘properly’ and that ‘you are our last hope’,” the Tribunal said.

He told Judge Nkabinde that there was ‘no case” against Zuma. He bragged about his political connections.

The Tribunal said: “It seems to us it was to impress upon her that he had political connections, with the hope that when he discussed the Zuma/Thint matters, this would weigh heavily on her…..it points to an attempt to influence.”

It rejected his version that he had merely visited her to congratulate her on her recent appointment to the court.

It also rejected his version that there was nothing wrong with judges discussing pending cases with other judges.

The Tribunal agreed with the submission by then Chief Justice Pius Langa that as an “elementary principle of judicial ethics” judges of one division were precluded from discussing the merits of matters with judges of the highest court while judgment was  still pending.

“We do not know whether Judge President Hlophe ever practised law as either an advocate or an attorney prior to his elevation. However, by 2008, he had  been a judge for over 13 years, five of those as a Judge President. He is expected to have been aware of it (the principle) and, on the balance, he was.”

The tribunal also lambasted Hlophe for attacking fellow judges, accusing them of dishonesty and making demeaning, unfounded and scurrilous attacks on them, including Chief Justice Langa.