Controversial South African advocate Malesela Daniel Teffo is facing disbarment in an application by the Legal Practice Council (LPC) to have him struck from the roll, writes Tania Broughton. 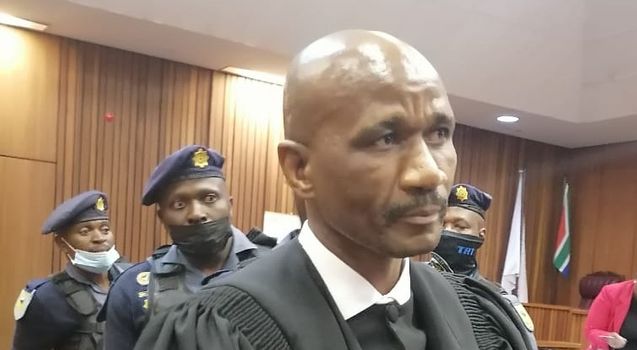 Teffo has been representing four of the five men accused of murdering local football hero Senzo Meyiwa, and the advocate’s televised antics – including swearing and accusing the presiding judge of practising witchcraft – have raised eyebrows among the legal fraternity.

The LPC has levelled 22 charges against him in the application that was heard before Pretoria High Court Judge Stanley Nyathi and Acting Judge Thembi Bokako. Judgement was reserved.

The voluminous court documents paint a picture of Teffo, whose practice mainly involves police labour-related disputes, as having a complete disregard for the law, judges and court orders.

Teffo, however, claims he is being persecuted by “racists”.

In one response to a complaint regarding his dealings with a senior police officer about a labour court matter, he admits that he called her a racist. He said he has ambitions to become a judge one day, but that he is being portrayed as a “fraudster advocate”, which he says he is not, and that those against him are trying to destroy his future.

A former police officer, Teffo was admitted as an advocate in 2009.

In her affidavit, LPC chairperson Kathleen Matolo-Dlepu, accuses Teffo of various transgressions, including: That he placed a matter on the unopposed roll in an attempt to secure default judgement, knowing full well that it was opposed; that he misled the Labour Court by handing in a false document; and that he breached court orders, consulted with clients without being briefed by an attorney, accepted payments directly from clients, and “fraudulently” used the names of attorneys without their consent.

He is also accused of assaulting and intimidating members of the SAPS, which resulted in an urgent application prohibiting him from entering the Johannesburg offices of SAPS and the State Attorney. Documents filed in the LPC application reflect that Teffo was rude to the judge who heard the interdict application, resulting in her recording her concerns about his “attitude” in her judgement.

In a letter he later wrote to police Minister Bheki Cele and others, Teffo referred to the judge as a “white lady on the bench” who he would not address as “honourable”, and said that he was busy reporting her to the Chief Justice. He said he was “not accountable to anyone”.

According to the documents, he breached the interdict by entering SAPS management offices. He was arrested and released on bail but then breached his bail conditions. One senior police officer, in correspondence with the LPC, urged that it fast-track its investigation into him because it was evident that “court orders will not stop him”.

The LPC also claims Teffo is being investigated for “corrupt activities” in that he worked with a police officer “to manipulate the outcome of labour-related appeals and arbitration proceedings” in return for money. He is also accused of disrupting a disciplinary hearing by insulting the employer representative with racial slurs and calling her “rubbish”. At another hearing, he grabbed the recording device by force and threatened to hit the chairperson.

Matolo-Dlepu said the LPC had afforded Teffo “numerous opportunities” to answer the complaints “but no answers have been forthcoming”. She said his conduct was “unprofessional, dishonourable and unworthy”.