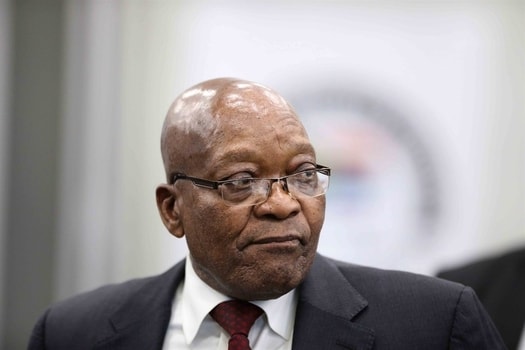 After years of dilly-dallying and legal challenges, the date for the start of the trial was finally agreed to this morning when legal representatives for Zuma  and Thales appeared before Judge Nkosinathi Chili in the Pietermaritzburg High Court, KwaZulu-Natal.

Zuma did not appear but the State said it had agreed to this.

The case is linked to the country’s 1999 multi-billion rand arms deal and allegations that the company paid Zuma for protection against any investigation into how it scored the contract.

The matter has been set down from May 17 to June 20 and is likely to be adjourned after that for other dates, still to be determined.

It is not yet known who the trial judge will be.

But Zuma has another legal hurdle to vault before his criminal trial begins: And one which could see him jailed.

As it promised to do last week, the Zondo Commission probing allegations of state capture, fraud and corruption, has now formally lodged an application with the Constitutional Court asking that it hold him in contempt of court for defying the court’s order that he appear before the commission.

The commission is asking that he be jailed for two years for his “intentional and unlawful” disobedience.

Zuma’s name has featured prominently during the commission as meddling with ministerial, government and state-owned enterprises appointments and for his relationship with the Gupta family.

The urgent application has not yet been set down for hearing and the Chief Justice Moegeng Moegeng is expected to issue directions regarding the way forward soon.

Zuma did not participate in the initial hearing before the court which resulted in the order that he appear and give affidavits when asked to do so.

Following that ruling, he publicly stated that he would not comply - citing that he believed Judge Raymond Zondo was biased against him and his family.

In spite of being summoned to appear on February 15, his lawyers in a “courtesy letter”, said he would not.

In his affidavit in the contempt application commission secretary Itumeleng Mosala said Zuma’s  conduct required the urgent attention of the court because of the “seriousness of the threat that his conduct poses to public trust in, and in respect for, the authority of the courts and the rule of law.”

“As former president he is expected to set an example by his words and conduct.

“There is a grave risk that he will inspire others to do so, and the rule of law will be fundamentally weakened.

“The interests of justice require a swift response,” Mosala said.

Apart from deliberately disobeying the court order, Mosala said Zuma had not spared the rest of the judiciary from his attack.

“He has made scurrilous statements about the courts and certain other members of the judiciary. The court must step in to defend the judiciary as a whole against his unwarranted attacks.

“He considered himself to be above the law, or subject to a different rule of law.”

The commission is seeking an order of direct imprisonment but says if the court was inclined  to suspend the order, it should be on condition that Zuma appear before the commission and a possible suitable date was March 31 this year.”