A Song a Day Keeps the Doctors Okay

Lewis McDonald is a London lawyer used to travelling the globe working on energy deals but, during the coronavirus lockdown, he has become an internet singing sensation – for charity, of course! 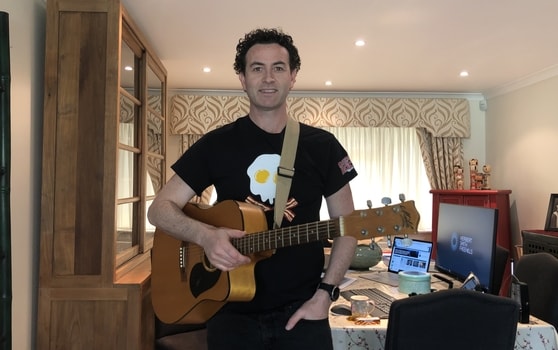 At home with his young daughters Lewis, who is head of Herbert Smith Freehills’ Global Energy Sector, has been making music to raise money for doctors, nurses and volunteers in the UK’s National Health Service and Medecins Sans Frontieres.

“It started when the partners were having virtual drinks one Friday a couple of weeks ago. I sang them a song on my guitar about self-isolation for a laugh and our chief executive, Justin (Justin D’Agostino), flicked it around on Whatsapp.  One of the senior partners encouraged me to post it on LinkedIn.”

Very soon Lewis was receiving requests and, with his daughters – aged nine and ten - doing the filming and editing on his iPad, he has been recording “a song a day to keep the doctors okay”!

He has also started a Just Giving page appealing to his “fans” to donate money to those on the front-line of the pandemic emergency. At the time of the interview he had raised almost £10 000.

For Lewis the global nature of what has been unfolding is especially poignant given his role at Herbert Smith Freehills.

“Watching what has been happening has been like witnessing a wave breaking across the world,” he says. “You can learn from it. As you move across the planet, your clients, no matter where they are, are asking the same questions.”

“Getting their perception of what is happening, whether they are in Milan or Beijing, has been invaluable. There are a lot of common issues on the business side and, in the energy sector, some of these are huge. What do you do if you can’t take the energy supplies you are contracted to take, for instance?”

At the heart of it, Lewis says, a lawyer needs to show empathy and to try to understand the position the individual is in.

“Ultimately, to be useful, you have to understand what you, as someone with specialist knowledge, can do and what the firm’s role can be.”

Like for so many living high pressure lives, he says the pandemic lockdown has been a time for reflection on what really matters with many asking, “Where do we go from here?”

“I think life has been out of kilter for a lot of people - especially professionals - and now, having some time and learning a new way of working, they are reassessing what is important.”

Across the globe change will be inevitable, he says.

“What this pandemic has highlighted is our commonality. But it will also highlight the difference between well-governed and less well governed countries.”

People will need to make choices about what they want from their leaders and also assess their own attitudes.

“A country like South Korea shut the spread of this virus down very quickly. As a nation they know how to work together – there is a strong sense of cooperation and unity,” he says. China too worked efficiently and quickly for the greater good.

“What has happened will cause people to reflect on the underlying qualities in a society and question what they want to see in their own society.”

However, he believes, it will be the agility, honesty and transparency of a country’s leadership and their overall intentions which will be key to success or failure.

“The world is complicated and no one has the right answers. You can just do the best with what you have and ensure you have the right people at the top but, this is neither easy nor common because people have interests, ego and prejudices that stand in the way of the greater good.”

Lewis was born in Scotland but grew up in New Zealand and Australia. He has worked across Asia including South Korea, Japan, Singapore, Hong Kong and has been involved in projects in mainland China.  He now lives in London and his clients are spread across Europe, Asia and the UK.

One of the projects he has been involved in has been an energy deal in Mozambique – a deal so massive that it is set to double the country’s GDP.

His musical talent, he says, is inherited from both his parents. His mum sings in a harmony choir and his dad loves “mucking around on the guitar”.

Lewis was given his first electric guitar by his parents when he was 15 and immediately started a heavy metal band!

“Being isolated has given me the time to pick up the guitar again which I am enjoying. I hope by spending this time in lockdown raising money I can make a small contribution before we have to pick up again and look at how we move forward after this is over.”

Lewis has set up a JustGiving page that links directly to the COVID-19 appeal for the doctors and volunteers in the NHS (the UK National Health Service). You can donate by clicking here

Alternatively, please feel free to donate directly to Medicins Sans Frontiers, who are helping those affected by COVID-19 around the world here