This site uses cookies. By continuing to use this site you consent to our use of cookies. Close

Are you thinking about moving and working within the legal sector in Nigeria? Known as Africa’s giant and famous for being the largest oil producer on the continent, what is it really like to live and work there? 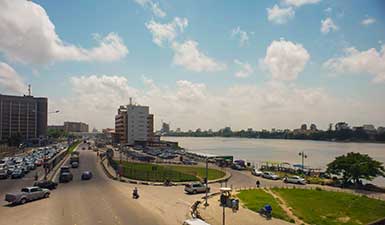 With a bustling legal market in Nigeria the choice can be overwhelming.  With a large number of small law firms, often quoted as one of the biggest obstacles to the modernization of legal practice, more and more lawyers are aiming for recognition in Chambers and other ranking systems to win work.  The larger more established law firms deliver high quality work on an international stage, most from their head offices in Lagos.

Lagos is muggy, indescribably busy, has the best food on the planet, a vibrant cultural life and is so uniquely African that it has to be experienced to be fully understood.

Its name is Portuguese for “lakes” which makes sense as so much of this port city is built on the islands of the Lagos Lagoon. Some say it was named after Lagos in Portugal by the first European explorers who arrived in the 1400s.

The sad history of Lagos as a centre of the slave trade has given it a deep spiritual relevance for many black people as it was from here that many of their forefathers were sold to work in the New World.

Over the last 50 years the Nigerian oil boom has spurred the growth of the city making it one of the biggest and fastest growing megacities of the world.  It’s so big that it has several local authorities governing its estimated population of – wait for it – 21 million.

There are many good suburbs but one of the most desireable  is Ikoyi , which also has hotels, golf courses and the federal high court.

This is a city for everyone with colourful street markets selling everything from traditional medicines to sarongs while shopping malls-ala America are there for those who prefer ringing tills and air conditioning.

While KFC and McDonalds do a roaring trade, the beauty of Lagos is its food. Spicy Jollof rice with peppers, onions and tomatoes makes one drool while dodo (fried plantain) is a snack that puts chocolate in the shade. And there are the pastry-based chin chins and puff puffs which can be washed down with a local lager or, even better, a pink zobo, made from Roselle, a Hibiscus plant.

Weather wise Lagos is near the equator so its tropical climate is warm and stable with the wettest month in June.

And, most important, Lagos is serviced by four internet providers but, be warned, it does not have the world’s fastest wifi. There is capacity for improvement though with undersea cables in place.

Working at a full-service law firm in the commercial city of Lagos is very exciting and challenging and so is advising on complex and sophisticated cross-border commercial transactions. The legal community is collegial and the environment is competitive but collaborative. Lagos is also a very social city with a lot of hustle and bustle; it represents the Nigerian spirit. I love my legal community and my Lagos.