This site uses cookies. By continuing to use this site you consent to our use of cookies. Close

Are you thinking about moving and working within the legal sector in Kenya? Home to the Big 5, world class athletics and known to have some of the most beautiful African country what else can you expect? 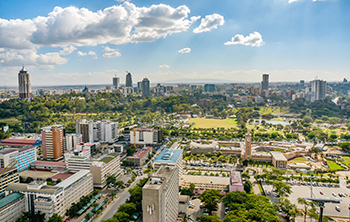 With the emergence of a large middle-class with disposable income, the expat business and local communities are not as segregated as they used to be. Kenyan and expat parents mix openly at kids’ schools, country clubs, bars, shopping centres and local restaurants.

A century ago Nairobi, Kenya’s capital city, was a tent town named after the Maasai expression for cool water. Today it is a thriving metropolis in the midst of a construction boom with an international airport, shopping malls and several upmarket residential areas. It is also the base for the United Nations in Africa giving the city a strong international feel.

Nairobi was founded by the British as a railway junction between Kampala in Uganda and Mombasa on the East African coast. Its British town planning legacy means the city has several parks and colonial-era buildings. In recent years, with the help of the Chinese government, the road infrastructure has been expanded and upgraded to ease congestion. Driving in Nairobi is not for the faint hearted and with the added overlay of Matatus, the mini-bus taxis that are a law unto themselves, is chaotic.

On the city’s boundary is a game reserve – complete with lions – and, in the distance, are the Ngong Hills, immortalised by Karen Blixen in the opening lines of her book Out of Africa.

Since its inception Nairobi has been a city of many cultures. The Kikuku and Maasai tribes both lived in the region when the colonialists chose the site for a stopping place. Indians, Somalies, Sudanese and now Chinese have sizeable communities.

On the cultural side Nairobi is ALIVE! This is the heart of the East African music scene with many artists from war-torn countries relocating to the city to continue their work. The city has several newspapers and a literary journal.

No visit to Nairobi is complete without a meal of Nyama Choma or roast meat. This is eaten with ugali, a stiff maize or sorghum porridge and greens. There is a wide variety of food to suit all tastes including takeaways, coffee shops and popular tourist venues like the Carnivore Restaurant.

“For someone as passionate about Africa as I am, the opportunity to better understand East Africa through the lens of economic hub that is Nairobi has been priceless. Nairobi is cosmopolitan, dynamic and most importantly rapidly developing.

And yes, the natural and ecological wonders really are as majestic as they appear in the magazines and TV